The Aerospace Museum of California is a private non-profit aviation museum located in North Highlands, California, outside of Sacramento, California, on the grounds of the former McClellan Air Force Base. The museum has a 4-acre outdoor Air Park, a large indoor exhibit space, a classroom, theater, conference room, and gift shop. Featured displays include: authentic military and civilian aircraft, rockets, historic World War II artifacts, objects from the Apollo missions, and an extensive collection of piston and jet engines. The museum preserves the history of the former base while supporting current STEM educational standards through its programming and exhibits.

The United States Air Force opened McClellan Field in 1935. The airfield was one of the largest employers in the region during its sixty years of operation as a logistical air depot. The base officially became McClellan Air Force Base in 1948, and gets its name from Major Hezekiah McClellan (1917-1936), a pioneer of early flight and exploration of the Arctic Circle in the 1930s. Over the years, McClellan Air Force Base was instrumental in the assembly and maintenance of many key aircraft during WWII as well as the Korean and Vietnam wars. Some of these aircraft are now part of the Aerospace Museum’s collection. McClellan Air Force Base closed in 2001 and became Sacramento McClellan Airport, a civil aviation airport.

The museum was originally established as the McClellan Aviation Museum in 1986. It was chartered by the National Museum of the United States Air Force. The McClellan Aviation Museum housed a collection of aircraft and other objects associated with the history of aviation. In 1995, the U.S. Air Force began the Base Realignment and Closure Process to close McClellan Field. By the end of the base closure process in 2001, the majority of the McClellan Aviation Museum collection were transferred as indefinite loan items from the U.S. Air Force to the newly formed Aerospace Museum of California. In 2001, it was incorporated as a non-profit organization. In 2004, the museum moved to 3200 Freedom Park Drive, McClellan Park and in February 2007 opened its new 35,000-square-foot (3,300 m2) Hardie Setzer Pavilion enabling some of the aircraft to be displayed indoors. In 2005, the museum changed its name to the Aerospace Museum of California.

The Aerospace Museum of California's mission is "to inspire students to explore, dream and discover STEM through hands-on learning." The museum's goal is to "give 30,000 Sacramento kids a STEM Experience— regardless of socio-economic background". The museum "hopes to inspire our future leaders to pursue a career in future STEM industries", and its vision is "to provide an interactive STEM experience to every child, school and family in the greater Sacramento region."

The museum is focused on current educational standards in science, technology, engineering, and math (S.T.E.M.) topics. 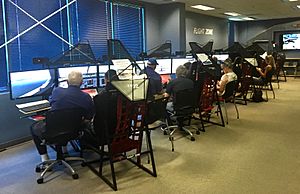 Students and instructors using the Flight Zone flight simulators at the Aerospace Museum of California.

The Aerospace Museum of California's Flight Zone houses six independent flight simulator stations. Each station runs the X-Plane 11 Flight Simulator program. They are supplemented by a high end gaming computers with a graphics card that supports three 27″ monitors with 2560×1440 resolution per monitor.

Visitors can “pilot” an aircraft using a professional flight simulator under the instruction of experienced flight instructors. This allows visitors to have the opportunity to practice taking off, flying, and landing virtually. The Flight Zone program is designed for students 5th to 12th grade who are interested in learning about and exploring aviation and related fields, and is also available to the general public.

The museum has over 40 aircraft in its collection from a fully restored Fairchild PT-19 to one of the last Grumman F-14D Tomcats retired from U.S. Navy service in 2006. In addition to aircraft, the collection includes many other historic artifacts relating to Sacramento's aerospace heritage. It also houses an extensive collection of historic aircraft engines. These include examples ranging from a World War I-era Gnome and Rhone rotary piston engines, large radial piston engines, and jet engines. Jet engines normally in the exhibit hall are GE I-16 (1940, Whittle design), J-57 #35 (1952), and J-58 “turbo-ramjet”, used on the SR-71 Blackbird Mach 3+ spyplane. The museum features an art gallery containing more than 50 original works, many from the Air Force Art Collection and the United States Coast Guard Art Collection.

A FedEx Express Boeing 727 on display at the museum

A Lockheed F-104B Starfighter on display at the museum 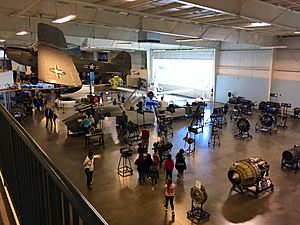 Visitors inside the exhibit hall at the museum

All content from Kiddle encyclopedia articles (including the article images and facts) can be freely used under Attribution-ShareAlike license, unless stated otherwise. Cite this article:
Aerospace Museum of California Facts for Kids. Kiddle Encyclopedia.