McLaren Vale is a wine region in the Australian state of South Australia located in the Adelaide metropolitan area and centred on the town of McLaren Vale about 38 kilometres (24 mi) south of the Adelaide city centre. It is internationally renowned for the wines it produces and included within the Great Wine Capitals of the World. The region was named after either David McLaren, the Colonial Manager of the South Australia Company or John McLaren (unrelated) who surveyed the area in 1839. Among the first settlers to the region in late 1839, were two English farmers from Devon, William Colton and Charles Thomas Hewett. William Colton established the Daringa Farm and Charles Thomas Hewett established Oxenberry Farm. Both men would be prominent in the early days of McLaren Vale. Although initially the region's main economic activity was the growing of cereal crops, John Reynell and Thomas Hardy planted grape vines in 1838 and the present-day Seaview and Hardy wineries were in operation as early as 1850. Grapes were first planted in the region in 1838 and some vines more than 100 years old are still producing. Today there are more than 88 cellar doors in McLaren Vale. The majority are small family-run operations and boutique wineries.

The wine region which is located within the southern end of the Adelaide metropolitan area is bounded by the coastline with Gulf St Vincent in the west and by the foothills of the Mount Lofty Ranges in the east and in the south with its northern boundary commencing at the coastline in the suburb of Hallett Cove and finishing in the foothills in the suburb of Chandlers Hill. It is located mainly within the local government area of the City of Onkaparinga with part of its northern end being in the local government area of the City of Marion.

The McLaren Vale wine region has a Mediterranean climate with four clear seasons. With a dry warm summer, the area has dry weather from December through to March or April, giving an easy change between summer and winter. It is gentle with long warm days and short cool nights. Winter rains of 580–700 mm per annum flow into a fresh spring. It rarely experiences frost or drought due to its close proximity to the sea. 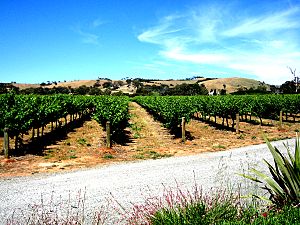 The McLaren Vale wine region is well known for its dry red wines, especially those made from Shiraz, Grenache and Mourvedre. Cabernet Sauvignon, Tempranillo and Sangiovese are also grown. White wine varieties in the wine region include Fiano, Vermentino, Grenache blanc, Roussanne and other such Mediterranean varieties.

Notable for producing Shiraz, the grape is by far the most important variety for the wine region, accounting for about 50% of the total crush. The area's thin soils, limited water and warm summers harness Shiraz's natural vigor and produce intense flavored fruit, and wine with a deep purple color that can last decades in the bottle. McLaren Vale wines are distinguished by their ripeness, elegance, structure, power and complexity. The wine region has 3218 hectares of Shiraz under vine. Other major varieties include Cabernet Sauvignon with 1288 ha planted, Chardonnay with 722 ha planted, and Grenache with 402 ha—much of this dry-grown (non-irrigated) bush vines.

All content from Kiddle encyclopedia articles (including the article images and facts) can be freely used under Attribution-ShareAlike license, unless stated otherwise. Cite this article:
McLaren Vale Facts for Kids. Kiddle Encyclopedia.