McLean is a town in Gray County, Texas, United States. It is part of the Pampa, Texas Micropolitan Statistical Area. The population was 778 as of the 2010 census.

According to the United States Census Bureau, McLean has a total area of 1.2 square miles (3.0 km2), all of it land. 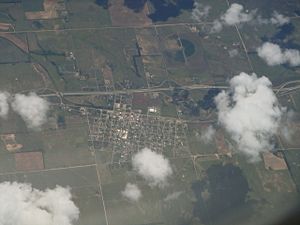 McLean as seen from an airplane, looking south

In 1901, Alfred Rowe, an English rancher who later perished in the sinking of the Titanic, donated land near a railroad cattle loading stop for the establishment of a town site. The Choctaw, Oklahoma and Texas Railroad Company constructed a water well and a switch and section house there. The town was named for Judge William P. McLean (1836–1925) of the Texas Legislature and Railroad Commission. The town grew rapidly. By 1904 McLean had three general stores, a bank, two wagonyards and livery stables, a lumberyard, and a newspaper, the McLean News. A windmill pumped water from a well drilled in the middle of Main Street, and citizens hauled the water in barrels and buckets. The town was incorporated in 1909 with C. S. Rice as mayor and became a center for agriculture.

In 1927, the Mother Road, U.S. Route 66, was built through the town, and it became a stop for tourists as well as a center for oil, livestock, and agriculture processing and shipping. By 1940 the population had risen to 1,500 with six churches, 59 businesses, and a newspaper. In 1942, a prisoner of war camp was built east-northeast of the town and was operated until 1945, housing about 3,000 German prisoners.

As the prominence of other Texas Panhandle cities, especially Amarillo and Pampa, surpassed McLean, the town began to decrease slowly in size. In 1984, the town was bypassed as part of the final phase of construction of Interstate 40, which replaced the old U.S. Route 66 through that area. 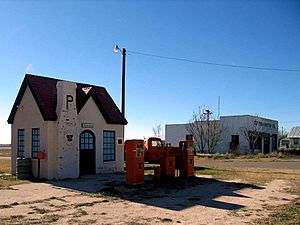 There were 343 households out of which 23.3% had children under the age of 18 living with them, 45.5% were married couples living together, 6.7% had a female householder with no husband present, and 45.5% were non-families. 42.6% of all households were made up of individuals and 25.4% had someone living alone who was 65 years of age or older. The average household size was 2.12 and the average family size was 2.96.

The McLean Commercial District, consisting of most of the downtown area, was listed in the historical register on December 20, 2006.

All content from Kiddle encyclopedia articles (including the article images and facts) can be freely used under Attribution-ShareAlike license, unless stated otherwise. Cite this article:
McLean, Texas Facts for Kids. Kiddle Encyclopedia.