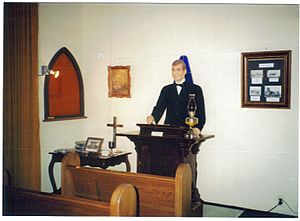 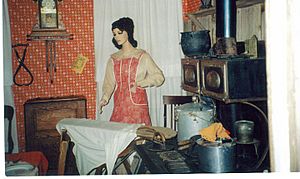 Pampa is a city in Gray County, Texas, United States. The population was 17,994 as of the 2010 census. Pampa is the county seat of Gray County and is the principal city of the Pampa Micropolitan Statistical Area, which includes both Gray and Roberts counties.

Pampa hosts the Top 'O Texas Rodeo each year in July, which brings competitors from Texas and the surrounding states to Gray County. The White Deer Land Company Museum, which showcases ranching exhibits, is located in downtown Pampa.

In 1888, the Santa Fe Railroad was constructed through the area where Pampa would be established. A rail station and telegraph office was built, and the townsite was laid out by George Tyng, manager of the White Deer Lands ranch. The town was first called "Glasgow", then "Sutton", and then the name was changed to "Pampa" after the pampas grasslands of South America at Mr. Tyng's suggestion. Timothy Dwight Hobart, a native of Vermont, sold plots of land for the town only to people who agreed to settle there and develop the land, and Pampa soon became a center for agriculture. Gas and oil were discovered in the Texas Panhandle in 1916. Pampa prospered greatly in the resulting oil boom, and the Gray County seat of government was moved in 1928 from Lefors to Pampa.

By the 1920s, Pampa was linked by rail to Hemphill County and Clinton, Oklahoma, through the combination of two similarly-named companies, the Clinton, Oklahoma, and Western Railroad Company and the Clinton-Oklahoma-Western Railroad Company of Texas. Both of these companies were soon leased and purchased by the Panhandle and Santa Fe Railway, which held them until disestablishment in 1965.

There were 7,387 households out of which 30.4% had children under the age of 18 living with them, 55.9% were married couples living together, 9.8% had a female householder with no husband present, and 31.3% were non-families. 28.8% of all households were made up of individuals and 15.3% had someone living alone who was 65 years of age or older. The average household size was 2.39 and the average family size was 2.94.

The Lovett Memorial Library was built on the entire west half of the 100 block of North Houston Street. The building was dedicated on 18 January 1955.

In 1985 the Harrington Foundation of Amarillo paid for the computerization of library records, joining the library for the first time into a consortium with most of the public libraries in the Panhandle.

By the mid-1990s Lovett Library was showing its age, and it was furthermore not compliant with the Americans for Disabilities Act. In October 1995 it was announced that Mrs. Ruth Ann Holland has left $500,000 to the Library Foundation in her will. In 1996 the Lovett Library Foundation' which managed the Holland bequest and several other substantial bequests, announced that a plan was being made to extensive renovate the old building. In January 1998 the library staff along with all books and much equipment moved from the Houston Street facility to the old B. M. Baker school on the south side, where the library was set up in the cafeteria and classroom annex in the south part of the school complex.

In June 2003 it was announced that R. L. Franklin, prominent rancher of Pampa, would donate two statues to the library to honor the 50th anniversary of the opening of the building in January 1955. One statue, by Don Ray of Channing, represents a seated woman reading to a child; this is erected in front of the library. Another statue representing a Pioneer Woman was by David Frech of New York; this was placed in the library's Reading Garden. Both statues were dedicated to four local women, including the donor's mother, each of whom had a long involvement with the library. The statues were dedicated on 9 January 2005, and at one of the dedicatory events the author Elmer Kelton was the guest speaker.

On June 8, 1995, a tornado hit the industrial section on the west side of Pampa, destroying or damaging about 250 businesses and homes. It resulted in $30 million in damage and was the costliest and the most destructive tornado on record for this town. It had a three-mile path and was two hundred yards wide. At its peak, it was rated an F4 on the Fujita Scale. Out of all the videos taken of this tornado, the most famous came from a local sheriff, Randy Stubblefield, who used his dashboard camera to videotape the twister. At one point in the video, the tornado lifted and hurled a van and a couple of flattened pick-up trucks into the air. In spite of the tornado's intensity, there were no deaths.

All content from Kiddle encyclopedia articles (including the article images and facts) can be freely used under Attribution-ShareAlike license, unless stated otherwise. Cite this article:
Pampa, Texas Facts for Kids. Kiddle Encyclopedia.