Mechi (Nepali: मेची अञ्चल), is one of the fourteen zones of Nepal and one of the four zones of Eastern Development Region. It is the easternmost zone of Nepal, with its headquarters at Ilam.

The Mechi Zone has Sikkim and West Bengal (India) to the east, Bihar (India) to the south, the Koshi Zone to the west and the Tibet Autonomous Region (People's Republic of China) to the north.

The most important river in the Mechi Zone is the Mechi, tributary of the Mahananda River. Another river is the Tamar River.

In the northern part of the zone, mainly in the Taplejung district that is in the eastern Himalayas, there are several high mountains. The highest is Kanchenjunga (Nepali: कञ्चनजङ्घा Kanchanjaŋghā) that, with 8,586 m (28,169 ft) high, is the third highest mountain of the world; it is on the border with Sikkim and in the Kanchanjungha Conservation Area. 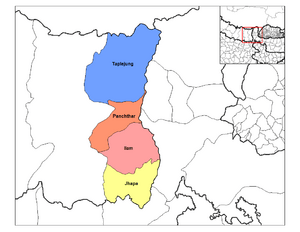 Districts of the Mechi Zone.

The zone has 4 Districts and 190 Village Development Committees/Municipalities (VDC - the smallest administrative units):

All content from Kiddle encyclopedia articles (including the article images and facts) can be freely used under Attribution-ShareAlike license, unless stated otherwise. Cite this article:
Mechi Zone Facts for Kids. Kiddle Encyclopedia.