"Medieval Manipur" refers to a long period of history of Manipur between the "ancient period" and the "modern period". It encompasses the 15th century AD to the 19th century AD. 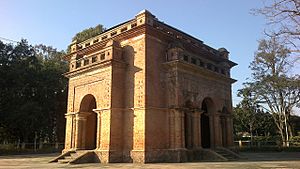 Monument of Bheigyachandra Maharaj in Manipur

The start of the period is typically taken to be the slow collapse of the Ancient Meitei faith, during the reign of Meidingu Senbi Kiyamba (1467-1507). It was during his reign the Brahmin people migrated to the kingdom and the microscopic volume of Vaishnavism proceeded with the worship of the Pheiya (sacred stone from Pong kingdom) as Hindu God Vishnu. 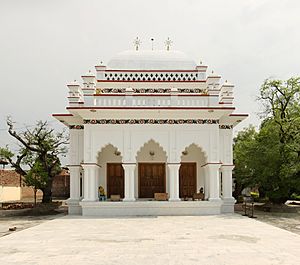 A Hindu temple of medieval times in Manipur kingdom.

During the reign of Emperor Pamheiba Garib Niwaz (1709-1748), the name of the kingdom was changed from "Kangleipak" into "Manipur". It is during his regime the religion of the entire Meitei ethnicity was forcibly converted from Sanamahism into Hinduism. In 1729 AD, Puya Mei Thaba, the historic burning of the sacred scriptures of Sanamahism took place.

All content from Kiddle encyclopedia articles (including the article images and facts) can be freely used under Attribution-ShareAlike license, unless stated otherwise. Cite this article:
Medieval Manipur Facts for Kids. Kiddle Encyclopedia.