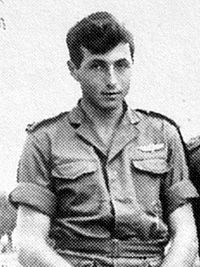 Meir Har-Zion (25 February 1934 – 14 March 2014) was an Israeli military commando. He was a key member of Unit 101. Chief of Staff Moshe Dayan described him as "the finest of our commando soldiers, the best soldier ever to emerge in the IDF." Meanwhile, Ariel Sharon described him as "the elite of the elite." He was born in Herzliya, British Mandate of Palestine.

All content from Kiddle encyclopedia articles (including the article images and facts) can be freely used under Attribution-ShareAlike license, unless stated otherwise. Cite this article:
Meir Har-Zion Facts for Kids. Kiddle Encyclopedia.