There were 938 households out of which 31.9% had children under the age of 18 living with them. 50.0% were married couples living together, 16.7% had a female householder with no husband present and 28.9% were non-families. 25.4% of all households were made up of individuals and 14.2% had someone living alone who was 65 years of age or older. The average household size was 2.54 and the average family size was 3.04. 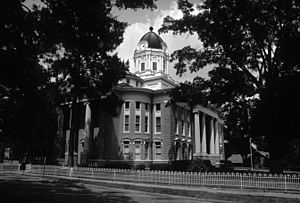 Mendenhall had a movie theatre called the Star Theatre, built by Edgar French, Ben Slay and Lonnie Burnham. Located on Main Street, the building boasted a 1 screen auditorium complete with balcony. It also featured a pool hall and three offices upstairs, one of which housed the city's Chamber of Commerce.

The Star Theatre opened for business on November 9, 1938 with the western, Born to the West.The price of admission was 11 cents and a box of popcorn was a dime. A man from Prentiss was initially hired to run the theatre, but he was soon "sent packing" and Edgar French informed his son, George Lewis French, that "You're taking over that picture show." Lewis French, who had worked in his father's ice plant growing up and was trained as a bookkeeper at Clarks Commercial College in Jackson, had no experience in running a movie theatre. He went to New Orleans to learn how to book movies and run the projection equipment. Aside from time spent serving in Europe as a radio man during World War II, French continued to operate the Star Theatre until he decided to close it in 1971.

During the late 1960s, the Star Theatre had problems with vandalism and growing racial tensions among its young patrons who objected to maintaining segregation. Under Jim Crow customs, black customers were required to sit in the segregated balcony and wanted this changed after national legislation to end such practices. In October 1979, a newly remodeled and fully integrated Star Theatre reopened under the ownership of Danny Collins, a young local entrepreneur. Its first movie was the Chuck Norris', A Force of One. The theatre enjoyed revived popularity until competition from video arcades and cable TV forced Collins to close some three years later.

The Star Theatre was repainted when used as a location for the film My Dog Skip. Heavy rains caused the roof to collapse in April 2008. The theatre burnt down in 2016.

All content from Kiddle encyclopedia articles (including the article images and facts) can be freely used under Attribution-ShareAlike license, unless stated otherwise. Cite this article:
Mendenhall, Mississippi Facts for Kids. Kiddle Encyclopedia.