Menfro is an unincorporated community in northeastern Perry County, Missouri. It is located eight miles (13 km) northeast of Perryville.

The town is said to have been named by St. Louis-San Francisco Railroad officials in 1904 "for the three men who were killed on the river, who were bringing in supplies for the railroad."

Menfro was established on a small portion of Levi Wiggin's land grant #1328. In January 1877, this small plot of land was subdivided by the Perry County Surveyor and eventually became known as the Town of Menfro.

In September 1879, Valentine and Margaret Hoehn sold a portion of land grant #1328 to Frederick Moldenhauer. The Moldenhauer family still owns this tract of land which is home to the Moldenhauer Alfalfa Mill.

Menfro began as a stop on the St. Louis, Memphis & South Eastern Railroad, which began construction on 22 September 1902, with the intention of linking Perry County with St. Louis in time for the 1904 World's Fair. A post office was opened in 1904 (closed in 1996). 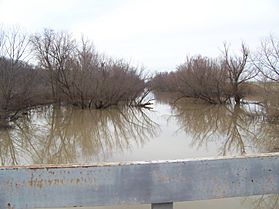 Menfro is situated in the Mississippi River Valley within an alluvial flood plain called the Bois Brule Bottom. Being nestled between the limestone bluffs along the western edge of Bois Brule Bottom and Cinque Hommes Creek directly to the east has made Menfro susceptible to flooding.

Erzfeld, Patricia L. Menfro: People's Dream, Mother Nature's Plan, Perry County Historical Society, softcover, 161 pages. This book is one of the few compilations on the History of Menfro, written from first and secondary sources. This article was written from the information found in this book.

All content from Kiddle encyclopedia articles (including the article images and facts) can be freely used under Attribution-ShareAlike license, unless stated otherwise. Cite this article:
Menfro, Missouri Facts for Kids. Kiddle Encyclopedia.