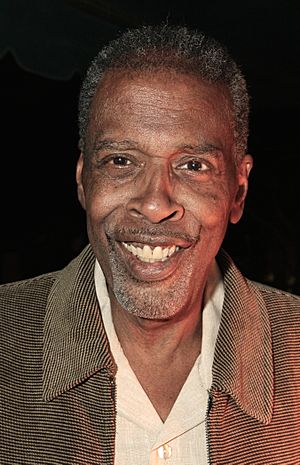 Meshach Taylor (April 11, 1947 – June 28, 2014) was an American actor. He is best known for his Emmy Award-nominated role as Anthony Bouvier on the CBS hit sitcom Designing Women (1986–1993). He also played Hollywood Montrose, a flamboyant window dresser, in the romantic comedy movie Mannequin (1987).

Taylor was born in Boston, Massachusetts to African American parents. He was raised in New Orleans, Louisiana. He graduated from Florida A&M University in 1993. Until his death, he had been married to actress, Bianca Ferguson since 1983. They had four children (three daughters and a son).

Taylor died from colorectal cancer on June 28, 2014 in Altadena, California, aged 67. The cancer was terminal.

All content from Kiddle encyclopedia articles (including the article images and facts) can be freely used under Attribution-ShareAlike license, unless stated otherwise. Cite this article:
Meshach Taylor Facts for Kids. Kiddle Encyclopedia.