Metter is a city in Candler County, Georgia, United States. The population was 4,130 at the 2010 census. The city is the county seat of Candler County. 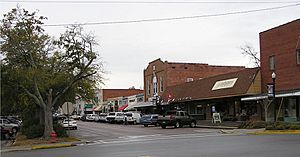 Downtown view of Metter. A tree-shaded park is to the left. 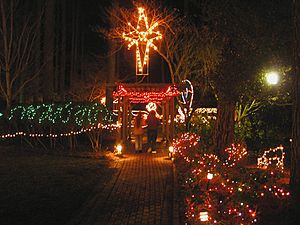 Part of the Christmas display at Guido Gardens 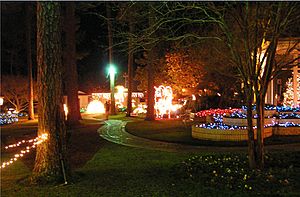 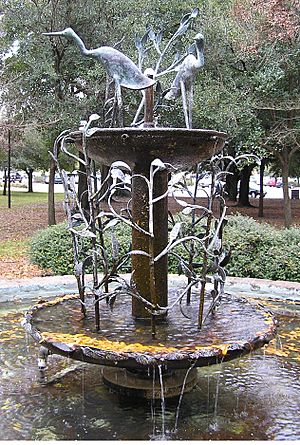 A view across the central, downtown parking area

Longtime residents use the slogan "Everything's Better in Metter".

Metter may be best known as the home of "The Sower", Michael Guido, who has delivered short evangelical PSAs on late-night television nationwide for decades. Dr. Guido's messages were filmed at Guido Gardens, which houses a public botanical garden and a school of ministry. Guido died at the age of 94 on February 22, 2009. His messages were aired on TV stations in the Georgia and South Carolina region.

A prominent event in Metter is Another Bloomin' Festival, an arts and crafts festival held the day before Easter. The festival draws thousands of out-of-town residents, who come to enjoy homemade desserts, barbecue, and crafts. In addition, it serves as a homecoming celebration for former residents who have returned to celebrate the holiday with their families.

There were 1,371 households out of which 31.2% had children under the age of 18 living with them, 44.0% were married couples living together, 19.5% had a female householder with no husband present, and 32.9% were non-families. 29.5% of all households were made up of individuals and 15.2% had someone living alone who was 65 years of age or older. The average household size was 2.58 and the average family size was 3.16.

All content from Kiddle encyclopedia articles (including the article images and facts) can be freely used under Attribution-ShareAlike license, unless stated otherwise. Cite this article:
Metter, Georgia Facts for Kids. Kiddle Encyclopedia.