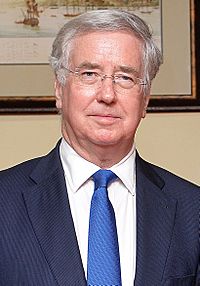 Sir Michael Cathel Fallon KCB MP (born 14 May 1952) is a British Conservative politician and Member of Parliament for Sevenoaks.

From 2014 until 2017, he served as Secretary of State for Defence. He was also a member of the National Security Council. He was previously Vice Chairman of the Conservative Party.

All content from Kiddle encyclopedia articles (including the article images and facts) can be freely used under Attribution-ShareAlike license, unless stated otherwise. Cite this article:
Michael Fallon Facts for Kids. Kiddle Encyclopedia.