Michael Walter Wynne (born September 4, 1944) is an American politician and business executive and was the 21st United States Secretary of the Air Force. Secretary of Defense Robert Gates asked for and received his resignation (and that of Chief of Staff T. Michael Moseley) on June 5, 2008, in the wake of the 2007 United States Air Force nuclear weapons incident and the mistaken shipment of Minuteman III parts to Taiwan in 2006, followed by an investigation by and a critical report from Admiral Kirkland H. Donald regarding the Minuteman incident.

Michael B. Donley, Department of Defense Director of Administration and Management, was nominated to replace Wynne by President George W. Bush on June 9, 2008.

Wynne was born in Clearwater, Florida, and raised in Melbourne, Florida. 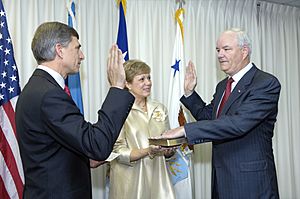 Michael W. Wynne takes the oath of office as the 21st Secretary of the Air Force.

In 1999 Wynne had retired as senior vice president from General Dynamics, where his role was in International Development and Strategy. He had rejoined the company at the invitation of the chairman to strengthen international activities. In between working with General Dynamics, he spent three years with Lockheed Martin, having sold the General Dynamics' Space Systems Division to then Martin Marietta. He successfully integrated the division into the Astronautics Company and became the general manager of the Space Launch Systems segment, combining the Titan with the Atlas Launch vehicles. Wynne spent a total of 23 years with General Dynamics in various senior positions with the Aircraft (F-16s) and Main Battle Tanks (M1A2) Divisions, and served on the corporate staff prior to becoming the president of Space Systems, including Launch Vehicles (Atlas and Centaur), and a corporate vice president.

Prior to joining the Bush Administration, Wynne was involved in venture capital. He nurtured small technology companies through their startup phase as a member of the NextGenFund Executive Committee, and served in executive positions of two of those companies.

Wynne has called on the United States to fund the development of both designs for the KC-X, a step that Dan Goure of the Lexington Institute says would even more delay to the long overdue project.

All content from Kiddle encyclopedia articles (including the article images and facts) can be freely used under Attribution-ShareAlike license, unless stated otherwise. Cite this article:
Michael Wynne Facts for Kids. Kiddle Encyclopedia.