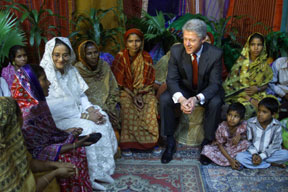 President Clinton and Prime Minister Sheikh Hasina at a microcredit program with Bangladeshi villagers at the US Embassy in Dhaka, 2000

A microcredit (sometimes called a micro-loan, or microloan) is a special kind of loan given to poor business people, mostly in developing countries. Microcredits were created to support entrepreneurship, and to lessen poverty. Very often, people getting a microcredit are illiterate: they cannot fill out forms to apply for a regular loan. Microcredits also work differently: the interest ot be paid is usually much higher than with a regular loan, often it is over 20%. The interest usually also has to be paid more often. Microcredits have been criticized, because people taking them often end up in a situation where they cannot repay their debt.

All content from Kiddle encyclopedia articles (including the article images and facts) can be freely used under Attribution-ShareAlike license, unless stated otherwise. Cite this article:
Microcredit Facts for Kids. Kiddle Encyclopedia.