The Grameen Bank is a community development bank started in Bangladesh. They give small loans (known as microcredit or "grameencredit" [1]) to poor people without asking for money before the loan is given. The word "Grameen", is made of the word "gram" or "village", and means "of the village". The system of this bank is based on the idea that the poor have skills but have no chance to use their skills without some money. The bank also controls some businesses, such as fabric, telephone and energy companies. Most of the banks loans go to women.

The Grameen Bank was started 1976 when Professor Muhammad Yunus, a Fulbright scholar and Professor at University of Chittagong, researched how to provide banking for the rural poor. In October 1983, the Grameen Bank Project was made into an independent bank by the government. The group and its first member, Muhammad Yunus, were awarded the Nobel Peace Prize in 2006.

Some people have said the banks prices are too expensive and put people in a debt-trap. Some have also said that the bank would not work if people did not give donations. At the same time, it is often seen as a success story in microfinance and as the guide for other groups around the world. 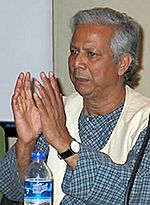 Muhammad Yunus, the banks first member, earned a Ph.D. in economics from Vanderbilt University in the United States. During the Bangladesh famine of 1974 he gave a small loan of USD 27 to a group of 42 families so that they could make small items and sell them without owing too much money. Yunus believed that a lot less people would be poor around Bangladesh if they could find small loans.

The Grameen Bank ("Bank of the Villages", in the Bengali language) is the product of Yunus' ideas. The bank began as a research project by Yunus and the Rural Economics Project at Bangladesh's University of Chittagong. They gave out some small loans and waited to know what would happen. In 1976, the village of Jobra and other villages surrounding the University of Chittagong became the first places where Grameen Bank loaned money to people. The Bank was very successful and with support from the main Bangladesh Bank, gave loans for the Tangail District (to the north of the capital, Dhaka). The bank's success continued and it soon gave loans in many areas of Bangladesh. On 2 October 1983, the project was made into an independent bank, by the Bangladeshi government. Bankers from ShoreBank, a community development bank in Chicago, helped Yunus by making Grameen Bank a part of Shorebank with money from the Ford Foundation. After the 1998 flood of Bangladesh, many people could not pay their debts to Grameen for a few years. By the beginning of 2005, the bank had loaned over USD 4.7 billion to poor people.

Grameen Bank now loans money to poor people all over India. By 2006, India had over 2,100 Grameen Bank branches. Its success has inspired similar projects in more than 40 countries around the world and has made World Bank to take an initiative to finance Grameen-type schemes.

The bank gets help with money. In the mid-1990s, the bank started getting most of its funding from the central bank of Bangladesh. More recently, Grameen has been borrowing money. The Government of Bangladesh guarantees that money borrowed by the Grameen Bank will be repaid.

Grameen Bank is best known for solidarity lending. The Bank also incorporates a set of values embodied in Bangladesh by the Sixteen Decisions. At every branch of Grameen Bank the borrowers recite these Decisions and vow to follow them.

There is solidarity lending in over 43 countries. Each borrower must belong to a five-member group, the group does not need to give a guarantee for a loan. The loan is made to only one person but the whole group is to make sure that the money is repaid. Each member has to pay for their own loan but if they have problems the group may help them pay because the group would not get any more loans from Grameen if all the groups loans were not paid.

Grameen Bank does not take people to court if they cannot pay, the system works on trust only. Solidarity groups agree with Grameen to save enough for extra payments in case they cannot pay every time.

Not many women in India can have loans from big banks so 97% of Grameens loans go to women. Women get treated very badly in some countries and groups, such as the World Bank are researching to know if small loans are helping women around the world. Over 98 percent of Grameens loans have been paid back but the Wall Street Journal says that 20% of the loans took more than a year longer than the time agreed to pay the loan back. Grameen says that more than half of its borrowers in Bangladesh (close to 50 million) now: have all children of school age in school, all household members eating three meals a day, a clean toilet, a rainproof house, clean drinking water and can pay 300 taka-a-week (around 4 USD) towards their loans.

One of the things Grameen Bank does for poor people is the Village Phone program. Women entrepreneurs can start a business providing a payphone service in rural areas of Bangladesh. The Village Phone Program was awarded the 2004 Petersburg Prize of EUR 100,000 for Technology to Development. The Development Gateway Foundation said:

...Grameen has created a new class of women entrepreneurs who have raised themselves from poverty. Moreover, it has improved the livelihoods of farmers and others who are provided access to critical market information and lifeline communications previously unattainable in some 28,000 villages of Bangladesh. More than 55,000 phones are currently in operation, with more than 80 million people benefiting from access to market information, news from relatives, and more.

In 2003, Grameen Bank started a new loan program, different from the Solidarity Group, to help the beggars in Bangladesh. This program is made to give small loans to beggars. The loans cost only the amount of the loan and the repayment take a long time, for example, a beggar taking a small loan of around 100 taka (about US $1.50) can pay only 2.00 taka (about 3.4 US cents) per week and only repays 100 taka.

Grameen Bank received awards such as, the Bangladesh Independence Day Award, in 1994. The bank got its best known award on 13 October 2006, when the Nobel Committee awarded Grameen Bank and its first member, Muhammad Yunus, the 2006 Nobel Peace Prize "for their efforts to create economic and social development from below." The Nobel Foundation says:

From modest beginnings three decades ago, Yunus has, first and foremost through Grameen Bank, developed micro-credit into an ever more important instrument in the struggle against poverty. Grameen Bank has been a source of ideas and models for the many institutions in the field of micro-credit that have sprung up around the world.

Mosammat Taslima Begum, used her first loan of 16-euro (20-dollar) from the bank in 1992 to buy a goat and subsequently became a successful entrepreneur and one of the elected board members of the bank. She collected the Nobel Prize for Grameen Bank on 10 December 2006, at the prize awarding ceremony in Oslo City Hall.

Grameen Bank is the only business to have won a Nobel Prize. In a speech given at the presentation ceremony, Professor Ole Danbolt Mjøs, Chairman of the Norwegian Nobel Committee, said that, by giving the prize to Grameen Bank and Muhammad Yunus, the Norwegian Nobel Committee wanted to make more contact with the Muslim world, to help women, and on to fight against poverty.

The people in Bangladesh were very happy with the Nobel Prize. Some critics asserted that the award affirms neoliberalism.

On 11 July 2005 the Grameen Mutual Fund One (GMFO), was listed as an Initial Public Offering. One of the first mutual funds of its kind, GMFO will allow the over four million Grameen bank members, as well as non-members, to buy into Bangladesh's capital markets. The Grameen group is worth over USD 7.4 billion.

Some people do not agree with Grameen

Sudhirendar Sharma, a development analyst, says that the Grameen Bank has "landed poor communities in a perpetual debt-trap", and that its ultimate benefit goes to the corporations that sell capital goods and infrastructure to the borrowers. Prime Minister of Bangladesh, Sheikh Hasina, who said, "There is no difference between usurers [Yunus] and corrupt people." Hasina also says the bank wants too much in return for the loans. Loans from Grameen Bank cost more than bigger banks, around 20% interest. The Mises Institute's Jeffrey Tucker says that Grameen Bank is not good enough for Indias economy and is a way of giving money to people who are not working.

All content from Kiddle encyclopedia articles (including the article images and facts) can be freely used under Attribution-ShareAlike license, unless stated otherwise. Cite this article:
Grameen Bank Facts for Kids. Kiddle Encyclopedia.