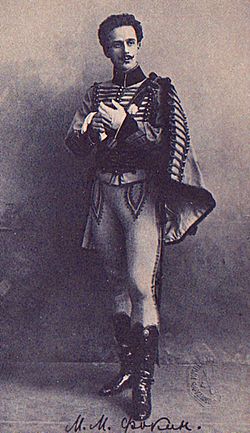 Mikhail Fokine, costumed for the role of Lucien d'Hervilly, in Marius Petipa's production of the ballet Paquita.
Saint Petersburg, 1898.

Mikhail Fokine (23 April [O.S. 11 April] 1880 – 22 August 1942) was a Russian choreographer and dancer. He was born in St Petersburg, the son of a prosperous middle-class merchant. At the age of nine, he was accepted into the St Petersburg Imperial Ballet School. In 1898, on his 18th birthday, he debuted on the stage of the Imperial Mariinsky Theatre in Paquita, with the Imperial Russian Ballet. In 1902, he became a teacher with the ballet school.

Fokine hoped to go beyond the older ballet traditions. To him virtuoso ballet techniques were not an end in themselves, but a means of expression. He believed that many of the ballets of his time used costuming and mime which did not reflect the themes of the ballets. Therefore, he tried to strip ballets of their artificial miming and outdated costumes. In addition, as a choreographer, he started a reform that took ballerinas out of their pointe shoes. Also, he experimented with a freer use of the arms and torso. He presented his reformist ideas to the management of the Imperial theatre, but did not get their support. Some of his early works include the ballet Acis and Galatea (1905) and The Dying Swan (1907), which was a solo dance for Anna Pavlova, choreographed to the music of Saint-Saëns' Le Cygne.

In 1909, Sergei Diaghilev invited Fokine to become the choreographer of his Ballets Russes in Paris. Fokine broke off the collaboration in 1912, jealous of Diaghilev's close relationship with Vaslav Nijinsky. He moved to Sweden in 1918 and later established his home in New York City, where he founded a ballet school and continued to appear with his wife, Vera Fokina. He became a United States citizen in 1932. Fokine died in New York on 22 August 1942.

Fokine staged more than 70 ballets in Europe and the United States. His best known works were Chopiniana (later revised as Les Sylphides), Le Carnaval and Le Pavillon d'Armide. Among his works for the Ballets Russes were The Firebird, Petrushka, Le Spectre de la Rose and Daphnis et Chloé. Also, for the Ballets Russes, he created a ballet out of Rimsky-Korsakov's Scheherazade. His pieces are still performed by the leading ballet troupes of the world.

All content from Kiddle encyclopedia articles (including the article images and facts) can be freely used under Attribution-ShareAlike license, unless stated otherwise. Cite this article:
Mikhail Fokine Facts for Kids. Kiddle Encyclopedia.