Milecastle 44 (Allolee) was a milecastle on Hadrian's Wall .

Milecastle 44 is located about 1.5 kilometres (0.93 mi) west of the Great Chesters fort (Aesica). The milecastle survives as a small number of visible facing stones, and a turf-covered bank. The bank measures 3.5 metres (11 ft) wide and 0.9 metres (3.0 ft) high. It is a long-axis type measuring 20.3 metres (67 ft) north-south by 17.0 metres (55.8 ft) east-west internally. An excavation was made by trenching around the inner face, but no published report is available. The agger of the road leading to the milecastle from the Military Way is visible, measuring 3.5 metres (11 ft) wide and 0.2 metres (7.9 in) high.

Each milecastle on Hadrian's Wall had two associated turret structures. These turrets were positioned approximately one-third and two-thirds of a Roman mile to the west of the Milecastle, and would probably have been manned by part of the milecastle's garrison. The turrets associated with Milecastle 44 are known as Turret 44A and Turret 44B.

Turret 44A (Allolee West) was located by exploratory excavation in 1912. The turret is visible as a square turf-covered bank, 30 centimetres high. 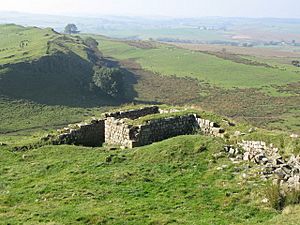 Turret 44B (Mucklebank) was excavated in 1892 and left exposed. The excavations yielded a coin of Valens, and outside the southeast corner, a centurial stone, inscribed "Coh Ic Flau Cve". The turret is visible as consolidated masonry with a maximum height of 1.9 metres.

All content from Kiddle encyclopedia articles (including the article images and facts) can be freely used under Attribution-ShareAlike license, unless stated otherwise. Cite this article:
Milecastle 44 Facts for Kids. Kiddle Encyclopedia.