Kids Encyclopedia Facts
Not to be confused with William Miller Chapel and Ascension Rock.

Miller Chapel is the spiritual center of the Princeton Theological Seminary, located in New Jersey, United States, and has been in continuous use since its completion in 1834. It was built by renowned local architect and builder Charles Steadman in stuccoed brick with a simple Doric portico. As the chapel of the oldest Presbyterian Seminary in the United States, the building has been home to many of the most important Presbyterian theologians, including the great figures of the Princeton Theology. The narthex has plaques that honor Samuel Miller, after whom the chapel is named, Charles Hodge, Archibald Alexander Hodge, Caspar Wistar Hodge, Sr., and B. B. Warfield. 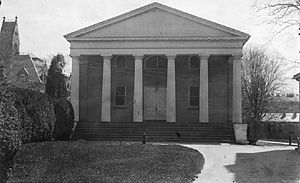 Miller Chapel with its pre-1933 design, located adjacent to Alexander Hall, facing Mercer Street. The Stuart Hall tower, since removed, can be seen at left.

The chapel originally faced Mercer Street to the east and slightly behind Alexander Hall. It was designed in the Reformed tradition with one worship space, unifying the choir, congregants, and clergy, and with a central pulpit, emphasizing the proclamation of the Word of God. Originally a twin building was planned so as to flank Alexander Hall with Greek Revival buildings in the same way Nassau Hall was flanked by the original Whig and Clio Halls. 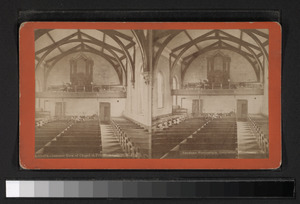 An 1874 renovation added Victorian stained glass windows and an organ, moving away from the traditional Reformed aversion to instruments in worship. In 1933 a more substantial renovation by Delano & Aldrich moved the chapel so as to face the interior of the campus, serving as the cornerstone of two squares, bounded by Alexander and Hodge Halls to the north and Stuart and Brown Halls in the south. The renovation also enlarged the building and removed the Victorian windows so as to restore a more simple appearance, consistent with the Seminary's Reformed heritage. Later renovations took place in 1964 and 2000. The chapel is home to the Joe R. Engle Organ, given to the Seminary in 2000. In addition to daily services the chapel hosts a variety of concerts during the course of the year. Weddings in the chapel are limited to those where either the bride, groom, or parent of either, is a student, graduate, trustee, or employee of the seminary.

All content from Kiddle encyclopedia articles (including the article images and facts) can be freely used under Attribution-ShareAlike license, unless stated otherwise. Cite this article:
Miller Chapel Facts for Kids. Kiddle Encyclopedia.