The university, originally known as the College of New Jersey, held classes for one year in Elizabeth and nine years in Newark before the hall was completed in 1756. Designed originally by Robert Smith, the building was subsequently remodeled by notable American architects Benjamin Latrobe, after the 1802 fire, and John Notman, after the 1855 fire. In the early years of Princeton University, Nassau Hall accommodated classrooms, a library, a chapel, and residential space for students and faculty. It housed the university's first Department of Psychology, for example.

During the American Revolutionary War, Nassau Hall was possessed by both British and American forces and suffered considerable damage, especially during the Battle of Princeton on January 3, 1777. From June 30 to November 4, 1783, Princeton was the provisional capital of the United States, and Nassau Hall served as its seat of government. The Congress of the Confederation met in the building's library on the second floor. According to Princeton University, "Here Congress congratulated George Washington on his successful termination of the war, received the news of the signing of the definitive treaty of peace with Great Britain, and welcomed the first foreign minister—from the Netherlands—accredited to the United States."

At present, Nassau Hall houses Princeton University's administrative offices, including that of the university's president. Old Nassau refers affectionately to the building and serves as a metonym for the university as a whole. The U.S. Department of the Interior designated Nassau Hall a National Historic Landmark in 1960, "signifying its importance in the Revolutionary War and in the history of the United States."

When the building was constructed in 1754, the college's board wanted to name it after Jonathan Belcher, the chosen royal governor of New Jersey, but he graciously declined, preferring it to be dedicated "to the immortal memory of the glorious King William III," who hailed from the Dutch House of Orange-Nassau. As a result, the building is known as Nassau Hall. 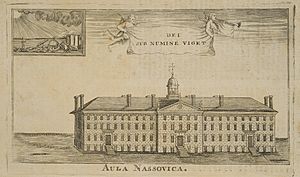 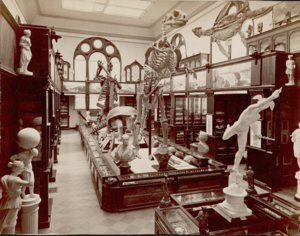 The Faculty Room in 1886, when it served as home to the art and natural history collections 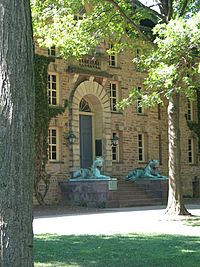 The New Jersey Legislature met for the first time in Nassau Hall on August 27, 1776.

The British Redcoats seized control of Nassau Hall in 1776, and American soldiers were forced to fire upon their own building in the Battle of Princeton on January 3, 1777. Three cannonballs were fired, but only two made contact. One glanced off the south side of the building; the damage can still be seen today. Another cannonball flew through a window in the Faculty Room and "decapitated" King George's portrait. The cannonball was said to have come from a gun in the artillery company commanded by Alexander Hamilton, who had been rejected by Princeton when he first came to the colonies. The result of the battle was a decisive Patriot victory, and Nassau Hall was retaken by the Americans.

The Congress of the Confederation convened in Nassau Hall for a little more than four months (from June 30, 1783, to November 4, 1783). The normal location in Philadelphia, Pennsylvania had to be vacated because of a mutiny by Continental Army soldiers.

Starting in 1869, each graduation class adds a new sprig of ivy to grow up the walls of the building.

The first U.S. commemorative postage stamp printed on colored paper honored Nassau Hall on its bicentennial. It depicted a front view of Nassau Hall. It was denominated at the first class rate of 3 cents and was on orange paper. It was first issued at Princeton, New Jersey, on September 22, 1956. 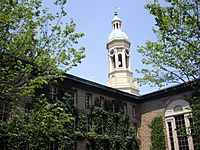 The song Old Nassau was adopted as Princeton University's alma mater (school song) in 1859. The lyrics were written by Harlan Page Peck, a member of Princeton's class of 1862, and first published in the March 1859 issue of Nassau Literary Magazine. The music, originally to be set to the tune of Auld Lang Syne, proved unworkable, and Karl A. Langlotz, a professor of music at Princeton who had studied composition under Franz Liszt, wrote a new melody for the song's lyrics.

As described in 1760 in the New American Magazine, "The simple interior design is shown in the plan, where a central corridor provided communication with the students' chambers and recitation rooms, the entrances, and the common prayer hall; and on the second floor, with the library over the central north entrance. The prayer hall was two stories high, measured 32 by 40 feet, and had a balcony at the north end which could be reached from the second-story entry. Partially below ground level, though dimly lighted by windows, was the cellar, which served as kitchen, dining area (beneath the prayer hall), and storeroom. In all there were probably forty rooms for the students, not including those added later in the cellar when a moat was dug to allow additional light and air into that dungeon."

On March 6, 1802, a fire devastated the interior of the hall, leaving only the exterior walls standing and destroying nearly all contents including 2,900 out of the library's 3,000 books. Benjamin H. Latrobe, the first architect professionally trained in the United States and known for his work in the Federal style, oversaw the reconstruction and refused his share of the $42,000 that had been raised for the effort. "The horizontal lintels over the three entrances at the front of the building were replaced with triangular pediments, and the circular window in the central pediment rising from the eves (sic) was replaced with a fanlight."

The hall was gutted by fire once again in March 1855. Reconstruction was carried out by John Notman of Philadelphia in his characteristic Italian Renaissance style, adding an often-criticized cupola and towers along with engineering improvements. Many of his architectural flourishes were removed in later renovations.

All content from Kiddle encyclopedia articles (including the article images and facts) can be freely used under Attribution-ShareAlike license, unless stated otherwise. Cite this article:
Nassau Hall Facts for Kids. Kiddle Encyclopedia.