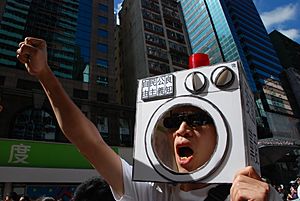 Mind control (also known as brainwashing, coercive persuasion or thought control) refers to a theory on the way some have tried to control the beliefs and behaviour of others.

The term has been applied to any tactic, psychological or otherwise, which undermines (damages) an individual's control over their own thinking, behaviour, emotions or decision making.

Theories of brainwashing and of mind control were originally developed to explain how totalitarian regimes appeared to succeed systematically in indoctrinating prisoners of war through propaganda and torture techniques.

The Oxford English Dictionary records the earliest known use of brainwashing in an article Edward Hunter in Miami News published on 7 October 1950. During the Korean War, Hunter, who worked at the time both as a journalist before becoming a U.S. intelligence agent, wrote a series of books and articles on the theme of Chinese brainwashing.

The Chinese term 洗腦 (xǐ năo, literally "wash brain") was originally used to describe methodologies of coercive persuasion used under the Maoist regime in China. The methods aimed to change people's mindset so they became "right-thinking" members of the new Chinese social system.

Hunter and those who picked up the Chinese term used it to explain why, unlike in earlier wars, a relatively high percentage of American GIs defected to the enemy side after becoming prisoners-of-war. British radio operator Robert W. Ford and British Army Colonel James Carne also claimed that the Chinese subjected them to brainwashing techniques during their war-era imprisonment. The most prominent case in the U.S. was that of Frank Schwable, a prisoner in the war. While in custody, he confessed to having taken part in germ warfare.

Cults and the shift of focus

After the Korean War, mind control theories shifted in focus from politics to religion. From the 1960s an increasing number of youths started to come into contact with new religious movements (NRM). Some who converted suddenly adopted beliefs and behaviors that differed greatly from those of their families and friends; in some cases they neglected or broke contact with their loved ones. Those against cults explained these sudden and seemingly dramatic religious conversions as due to mind control. The media was quick to follow suit, and social scientists sympathetic to the anti-cult movement, who were usually psychologists, developed more sophisticated models of brainwashing. While some psychologists were receptive to these theories, sociologists were for the most part skeptical of their ability to explain conversion to NRMs.

Some authors have pointed out that the ideas of mind control can be found in all stages of human history. They are essentially the extreme use of techniques of religious conversion and propaganda which are widespread in human history.

All content from Kiddle encyclopedia articles (including the article images and facts) can be freely used under Attribution-ShareAlike license, unless stated otherwise. Cite this article:
Mind control Facts for Kids. Kiddle Encyclopedia.