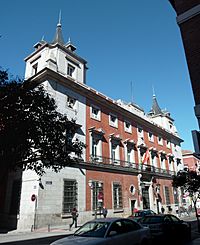 It's headquarters is located in Madrid, in the Palacio de la Marquesa de la Sonora.

The Ministry of Justice is responsible for the preparation and execution of government policy on development of law (criminal law, civil law, commercial law, ...), rights and religious freedom and worship, prerogative of mercy and titles of nobility and greatness of Spain.

In addition, the department shall be responsible for policy for the organization and support for the administration of justice, international judicial cooperation, as well as with the Autonomous Communities, in coordination with other relevant departments in this area. The ministry is also one that provides legal assistance to State.

All content from Kiddle encyclopedia articles (including the article images and facts) can be freely used under Attribution-ShareAlike license, unless stated otherwise. Cite this article:
Ministry of Justice (Spain) Facts for Kids. Kiddle Encyclopedia.