Minonk is a city in Minonk Township, Woodford County, Illinois, United States. The population was 2,078 at the 2010 census, down from 2,168 in 2000. It is part of the Peoria, Illinois Metropolitan Statistical Area. 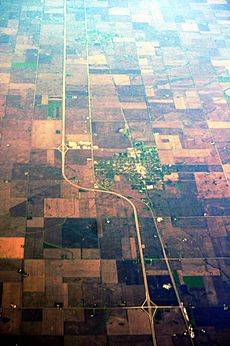 Aerial view of Minonk and nearby Interstate 39, 2012

There were 841 households, of which 31.9% had children under the age of 18 living with them, 57.9% were married couples living together, 9.2% had a female householder with no husband present, and 30.2% were non-families. 26.8% of all households were made up of individuals, and 15.6% had someone living alone who was 65 years of age or older. The average household size was 2.50 and the average family size was 3.02.

Panorama of Minonk from the north during harvest 2006

David Neal, an agent with the Illinois Central Railroad, is credited for naming the city. Local folklore provides varying accounts about the origins of the name “Minonk.” One version states that he originally named the area after a street in Boston, MA, where he owned property. A second story suggests that he changed the name of the settlement, originally referred to as “Marquette” on old French maps, to the Ojibwe word “Minonk,” meaning “a good place.” Minonk is the only city in the world with that name.

Early settlers were attracted to Minonk by a variety of livelihoods. Many came to work on the railroad. Others settled in the area to farm on the abundant, rich farmland. However, coal mining was the leading industry in the early years of Minonk. The first coal mines were developed in the 1860s, and at one point employed over 300 men. Two mines operated in Minonk: the first mine was located on the north edge of the city, and the second was situated a half-mile north of town.

All content from Kiddle encyclopedia articles (including the article images and facts) can be freely used under Attribution-ShareAlike license, unless stated otherwise. Cite this article:
Minonk, Illinois Facts for Kids. Kiddle Encyclopedia.