Miramar (Spanish for "Sea View") is a neighborhood in the northern part of the city of San Diego, California, United States. It includes residential areas and commercial and light industrial districts.

Most residents live on the Marine Corps Air Station Miramar (formerly Naval Air Station Miramar). Miramar was the site of the real Top Gun made famous by the movie Top Gun in 1986. NAS Miramar was realigned by the Base Realignment and Closure (BRAC) program in 1995 and turned over to the Marine Corps as a fixed wing and helicopter base in 1999. To the north of MCAS Miramar is the suburb of Mira Mesa. The neighborhood is located in City Council District 7 and is represented by Council member Scott Sherman.

The Miramar submarket consists of approximately 14 million square feet of distribution, warehouse, office, and Miramar Road frontage retail related space. Miramar is one of San Diego County's most recognized real estate markets due in part to its central location, size, and traditional industrial characteristics. This market historically maintains one of the highest occupancy rates in the county. Recent occupancy rates were approximately 91%. 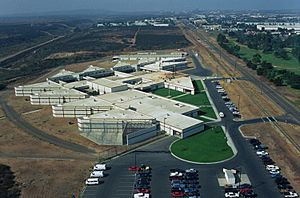 All content from Kiddle encyclopedia articles (including the article images and facts) can be freely used under Attribution-ShareAlike license, unless stated otherwise. Cite this article:
Miramar, San Diego Facts for Kids. Kiddle Encyclopedia.