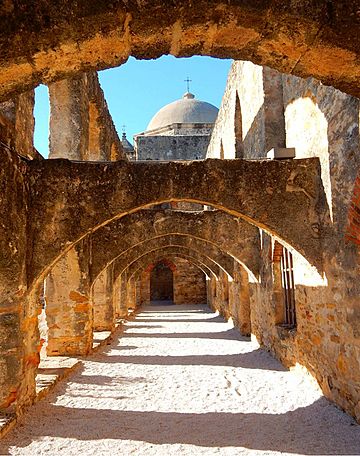 The mission was founded on February 23, 1720, because Mission San Antonio de Valero had become overcrowded shortly after its founding with refugees from the closed East Texas missions. Father Antonio Margil received permission from the governor of Coahuila and Texas, the Marquis de San Miguel de Aguayo, to build a new mission 5 miles (8 km) south of San Antonio de Valero. Like San Antonio de Valero, Mission San José served the Coahuiltecan Natives. The first buildings, made of brush, straw, and mud, were quickly replaced by large stone structures, including guest rooms, offices, a dining room, and a pantry. A heavy outer wall was built around the main part of the mission, and rooms for 350 Natives were built into the walls.

A new church, which is still standing, was constructed in 1768 from local limestone. The mission lands were given to its Natives in 1794, and mission activities officially ended in 1824. After that, the buildings were home to soldiers, the homeless, and bandits. Starting in 1933, the Civil Works Administration and then the Works Progress Administration provided the labor to rebuild and restore the grounds of the mission. Some of the funding for the restoration came from money allotted by the United States for the Texas Centennial Exposition held in Dallas in 1936. The mission walls and Indian quarters were re-built, and the granary was restored. 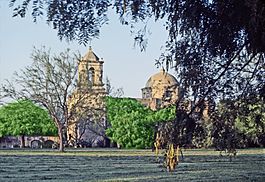 San José Mission in September of 1969 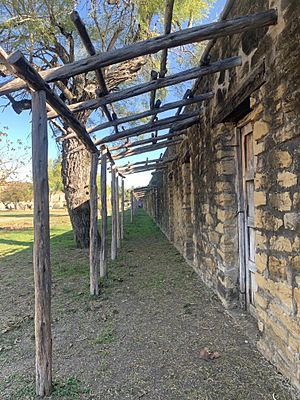 The church facade features from the top: a cross, representing Jesus Christ, St. Joseph (San José) holding the infant Jesus, St. Dominic and St. Francis, Our Lady of Guadalupe (the Virgin Mary), and St. Joachim and St. Anne holding the infant Mary. Located at the south wall of the church sacristy is the Rose Window. Sculptor and significance of the Rose Window is unknown. According to folklore, the window was sculpted by a Spanish master craftsman and artist Pedro Huizar and dedicated it to his sweetheart Rosa who, on her way from Spain to meet with Pedro, tragically lost her life at sea. The Rose Window was sculpted in 1775 and is an example of Baroque architecture in America. 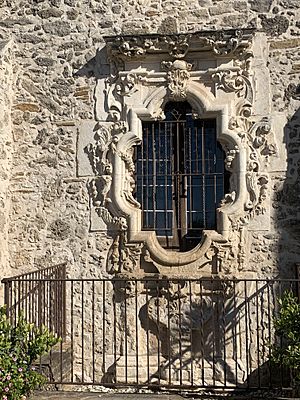 Mission San José is now part of the San Antonio Missions National Historical Park. In 2015, along with The Alamo and Mission Concepción, it became one of five missions in San Antonio designated a World Heritage Site by the United Nations Education, Scientific and Cultural Organization.

Today the mission is an active parish, and is staffed by the Order of Friars Minor. The current pastor is Fr. Rogelio Martinez, OFM.

All content from Kiddle encyclopedia articles (including the article images and facts) can be freely used under Attribution-ShareAlike license, unless stated otherwise. Cite this article:
Mission San José (Texas) Facts for Kids. Kiddle Encyclopedia.