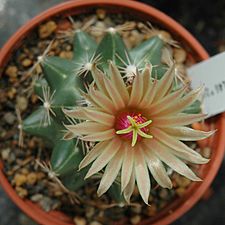 Escobaria missouriensis, the Missouri foxtail cactus and formerly Coryphantha missouriensis, is a species of low-growing North American cacti. It is found in along the Missouri River in the tallgrass prairie and shortgrass Great Plains, from Texas to Montana and the Dakotas, and in the Rocky Mountains woodlands of Ponderosa pine (Pinus ponderosa), pinyon-juniper, and Gambel oak (Quercus gambelii) west of it. It is also native to the Southwestern United States in Arizona, New Mexico, and Utah.

Escobaria missouriensis grows up to 30 centimetres (12 in) high and forms clumps to 30 centimetres (12 in) or greater in diameter. They are generally larger in the Southwest. The plants are primarily unbranched, except eastern populations that can be profusely branched. The spines are bright white, pale gray, or pale tan, weathering to gray or yellowish brown. The plant blooms in April to June, with flowers that are pale greenish yellow to yellow-green with midstripes of green or rose-pink to pale brown.

Escobaria missouriensis has been extirpated from many of its historically known sites by introduced fire ants, suburban development, brush encroachment following fire suppression, and over-grazing.

All content from Kiddle encyclopedia articles (including the article images and facts) can be freely used under Attribution-ShareAlike license, unless stated otherwise. Cite this article:
Missouri foxtail cactus Facts for Kids. Kiddle Encyclopedia.