Kids Encyclopedia Facts
This page is about the locality in New South Wales, Australia. For the town in Victoria, Australia, see Mitta Mitta, Victoria.

Mitta Mitta is a farming community in the north eastern part of the Riverina. It is situated by road, about 30 kilometres south from Bethungra and 21 kilometres north east from Nangus. 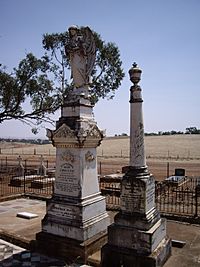 Mitta Mitta is locatable only by finding the old St Stephen's Anglican Church situated 8 kilometres along a corrugated dirt road that runs west from the Nangus to Bethungra road.

All content from Kiddle encyclopedia articles (including the article images and facts) can be freely used under Attribution-ShareAlike license, unless stated otherwise. Cite this article:
Mitta Mitta, New South Wales Facts for Kids. Kiddle Encyclopedia.