Nangus is a village on the Wagga Wagga to Gundagai Road on the north side of the Murrumbidgee River. From Nangus, Junee, Gundagai, Wantabadgery, Oura and Wagga Wagga are accessible. Nangus is approximately 24 kilometres (15 mi) due west of Gundagai in the Riverina area of Australia and in Gundagai Council. At the 2011 census, Nangus and the surrounding area had a population of 420. The nearby Nangus Station and Yabtree Station are heritage listed. 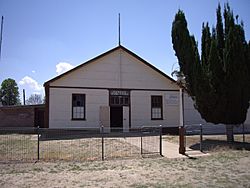 All content from Kiddle encyclopedia articles (including the article images and facts) can be freely used under Attribution-ShareAlike license, unless stated otherwise. Cite this article:
Nangus, New South Wales Facts for Kids. Kiddle Encyclopedia.