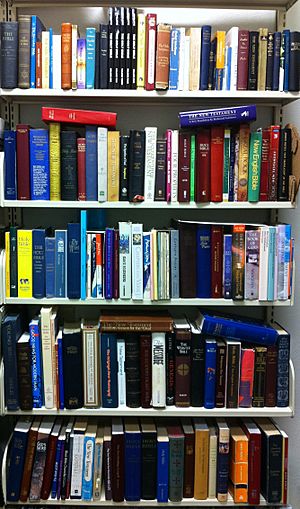 A sampling of the many English translations

There are many translations of the Bible in English.

Most English Bible translations are written from a Christian point of view.

The Authorized King James Version (KJV) is very popular. It is a literal (word-for-word) translation. The KJV Bible was translated from 1604 to 1611. Since 1600, many English words have changed. Because the KJV Bible is 400 years old, it is more difficult to read. But even though it is 400 years old, many expressions and idioms used in everyday modern English come from the KJV.

The New English Bible (1946) - from the United Kingdom. This is an simpler version of the KJV Bible.

Letters to Young Churches (1958) - by John Bertram Phillips. This is a translation of the New Testament Epistles (Letters).

The Good News Bible (1976) - from the American Bible Society. This is one of the most popular Bibles.

The New International Bible (1978) - This Bible is between the King James Version (very literal) and the Good News Bible (very informal).

On the internet, there are many translations of the Bible. You can read virtual Bibles. If you want to read part of the Bible, you can print that part. This is called "print on demand".

Today, there are many translations that are literal, not literal, and between. The Young's Literal Translation is very literal. The Message Bible and The Word on the Street are not literal.

In the Bible, men and women are not equal. Some new translations make men and women more equal. These versions are called feminist, gender neutral, or gender accurate.

Many people have written simpler Bibles. These Bibles use few words. Some are written for non-native speakers of English.

The World English Bible is a version of the Bible written in modern English. It began in 1997 and was first known as the American Standard Version 1997. The project began with the goal of producing an English-language version of the Bible that does not use older English nor Basic English.

It is based on the 1901 American Standard Version, the Greek Majority Text, and the Hebrew Biblia Hebraica Stuttgartensia with some minor changes made because of alternative readings in the Dead Sea Scrolls and the Septuagint but these alternative readings are ignored or restricted to the footnotes. There are seven passes of editing and reading for each book. The first pass updated about 1,000 words, phrases and grammatical constructs. The first manual pass was to add quotation marks and other punctuation, and to check the version against the Greek and Hebrew texts where there are large textual variants or the meaning is not clear.

Sometimes Jews and Christians do not agree on how to translate the Hebrew Bible, or Tanakh. Jews have written translations that follow Jewish opinions. These include:

Jewish Publication Society of America Version (JPS)(1917) — based on the Revised Version and American Standard Version (see above), but changed to follow Jewish opinions

New Jewish Publication Society of America Version (NJPS)(1985) — a new translation, not based on JPS 1917

Many Jewish Bible translations show the English and original Hebrew on facing pages. None of these translations is considered Simple English or Basic English.

All content from Kiddle encyclopedia articles (including the article images and facts) can be freely used under Attribution-ShareAlike license, unless stated otherwise. Cite this article:
Modern English Bible translations Facts for Kids. Kiddle Encyclopedia.