Melaleuca viminea, commonly known as mohan is a plant in the myrtle family Myrtaceae and is endemic to the south-west of Western Australia. It is variable in size and form from a densely branched, small shrub to a small tree. It has become naturalised locally in southern Victoria.

Its flowers are in heads, at or near the ends of the branches in groups, 25 mm (1 in) in diameter composed of 5 to 50 individual white or cream flowers. The stamens are arranged in five bundles around the flower, each bundle having 3 to 16 stamens. Flowers appear from July to November and are described as smelling sickly. The fruit are woody capsules, 2–4 mm (0.08–0.2 in) long. 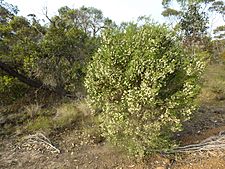 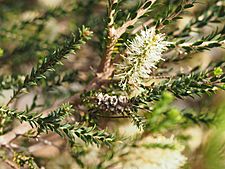 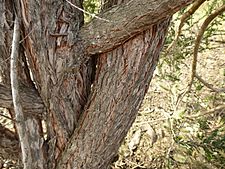 This species was first formally described in 1839 by John Lindley in A sketch of the vegetation of the Swan River Colony. The specific epithet (viminea) is a Latin word meaning "pliant" or "willowy".

This melaleuca is widespread in the south-west of Western Australia. It grows in sandy or clayey soils near watercourses, winter-wet depressions, rocky coastal areas and flats.

Melaleuca viminea is classified as "not threatened" by the Government of Western Australia Department of Parks and Wildlife.

All content from Kiddle encyclopedia articles (including the article images and facts) can be freely used under Attribution-ShareAlike license, unless stated otherwise. Cite this article:
Mohan Facts for Kids. Kiddle Encyclopedia.