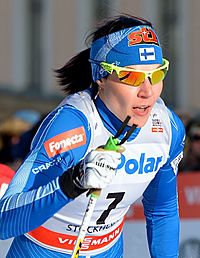 Mona-Liisa Nousiainen (née Malvalehto; 20 July 1983 – 29 July 2019) was a Finnish cross-country skier. He competed in the World Cup between 2002 and 2018. Nousiainen was born in Rovaniemi, Finland. In 1999, she won the Finnish Championship in accordion playing. She studied at the Sibelius Academy.

She announced her retirement from cross-country skiing after not being selected for the 2018 Winter Olympics. Nousiainen died on 29 July 2019 of cancer at the age of 36.

All content from Kiddle encyclopedia articles (including the article images and facts) can be freely used under Attribution-ShareAlike license, unless stated otherwise. Cite this article:
Mona-Liisa Nousiainen Facts for Kids. Kiddle Encyclopedia.