Monahans is a city in and the county seat of Ward County, Texas, United States. A very small portion of the city extends into Winkler County. The population was 6,953 at the 2010 census. 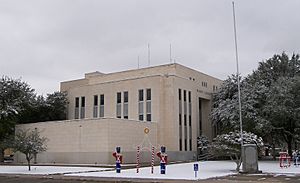 The Permian Basin, home to Monahans and Midland/Odessa MSA, is 250 miles (400 km) wide and 300 miles (480 km) long - Monahans is "The Center of the Permian Basin". The basin was formed during the Permian Period, the final portion of the Paleozoic Era. At the time, it was an ocean filled with abundant aquatic life.

In 1583, a Spanish explorer named Antonio de Espejo crossed this area on his way through present-day New Mexico. The Indians in the Monahans region were called "Vaqueros" by these Spanish explorers because they hunted the "hump-backed cow" or bison. Records of Spanish exploring the Los Medano (the sand dunes) outside Monahans can be traced to the early 1770s.

Located in a region where native Comanches, Mescalero, and Lipan Apache Indians once roamed, Monahans' history as a community extends back to the late 1880s with the expansion of the Texas and Pacific Railway across the south plains. For the few people living in West Texas, the building of a transcontinental railroad through the area meant the arrival of civilization. In the summer of 1881, Texas and Pacific Railroad contracted with surveyor John Thomas Monahan, who discovered that the lack of water for the laying crew and their animals would slow down construction of the rail. Monahans' digging of a water well produced an abundance of good water (250,000 US gallons (950,000 L) a day) and was instrumental in the success of the city. Prior to this solution, water had to be hauled from the area of Big Spring, Texas.

The availability of cheap land encouraged settlers to form a small community on the track known as Monahans Well. However, when oil was discovered in the area in 1926, the destiny of the community changed directions. Oil discovery brought people of many occupations and of varied interests to Monahans. The local economy began to change from an agricultural to an industrial economy,

"Monahans" is the name of an Application Processor (PXA 32x) that Intel developed and later sold to Marvell.

Thousands of tourists each year visit Monahans Sandhills State Park near Monahans. Sand surfing and sand football games can be seen year round, but particularly between March and November. Monahans Sandhills State Park is host to many family picnics and youth activities. The park is also a site for weddings. Many people visit the Sandhills at night to inquire about the "Lady of Oil" legend.

There were 2,496 households out of which 38.3% had children under the age of 18 living with them, 56.4% were married couples living together, 13.5% had a female householder with no husband present, and 26.4% were non-families. 24.3% of all households were made up of individuals and 12.7% had someone living alone who was 65 years of age or older. The average household size was 2.68 and the average family size was 3.19.

In December 2015, the Seattle Post-Intelligencer voted Monahans No. 5 among the ten "most conservative" cities in the United States in regard to campaign contributions. Other West Texas communities in the most conservative lineup are Hereford (No. 1), Dalhart (No. 5), and Childress (No. 9). Princeton in Collin County north of Dallas ranked No. 2. In contrast, El Cerrito, California, was named the "most liberal" city in the nation regarding political donations.

The Texas-New Mexico Railroad operates a 104-mile (167 km) branch line from a connection with the Union Pacific at Monahans. The branch line was constructed between 1928 and 1930 and terminates at Lovington, New Mexico.

All content from Kiddle encyclopedia articles (including the article images and facts) can be freely used under Attribution-ShareAlike license, unless stated otherwise. Cite this article:
Monahans, Texas Facts for Kids. Kiddle Encyclopedia.