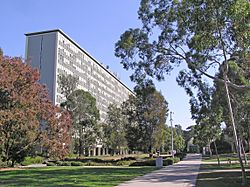 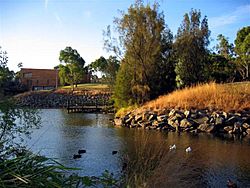 The Lake near the Halls of Residence 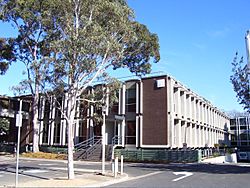 The Chancellory (building 3a)

The campus covers an area of over 1.1 km² and is the largest of the Monash University campuses, both in terms of size and student population. As of 2017, the Clayton Campus had over 41,000 students.

The campus has its own suburb and is one of the few university campuses in Australia to have its own postcode (3800),

The campus is located in the south-east Melbourne suburb of Clayton. This part of Melbourne contains the greatest density of high technology industries in Victoria.

The campus is accessible via several suburban bus routes, including the 703, 733, 737, 802/804/862, 630, the 900 SmartBus route. It is also accessible via the 601 shuttle bus which operates solely for Monash students and staff to commute between the campus and the nearby Huntingdale railway station. The university also operates inter-campus buses.

In 2018, Daniel Andrews announced that a new tram line would be constructed between Caulfield station and Rowville via Dandenong Road and Wellington Road, which would connect the Caulfield campus to the Clayton campus.

As well as the Australian Synchrotron, the Clayton Campus is adjacent to the CSIRO. Bosch, Bayer, Agilent Technologies Inc. and several other science and technology companies are also located nearby. Victoria's only specialist science and mathematics high school, the John Monash Science School, is also located on the Campus.

The Clayton Campus is home to large and sophisticated research facilities. The Australian Synchrotron, adjoining the campus, is one of the most recent and sophisticated of these. It is a 3 GeV synchrotron radiation facility that opened on 31 July 2007. It is capable of viewing matter at the molecular level using synchrotron light. Monash University contributed $5M towards the $206M cost of the synchrotron as a member of the funding partnership for the initial suite of beamlines.

Many of these facilities are located in the Monash Science Technology Research and Innovation Precinct (STRIP), a major development which houses corporate and university science and technology enterprises.

The Clayton Campus has the most extensive sporting facilities of any Monash campus. These are used by the campus' many sporting clubs, as well as recreationally by staff and students.

Facilities at the campus include: five football and cricket ovals (including a pavilion), 12 tennis courts, eight squash courts, a hockey field and pavilion, an American football field, a baseball field and pavilion, 21 badminton and table tennis courts, a martial arts hall, a fencing cage, a boxing studio and ring, a 1500m sq. gym, an aerobics studio and two swimming pools.

Clayton Campus plays host to a range of cultural events throughout the year, including plays, musicals, concerts, exhibitions and conferences.

Notable facilities include the Robert Blackwood Hall (with a capacity of 1600 people), the Alexander Theatre (capacity of 508), the Student Theatre and the Monash University Museum of Art.

The campus is home to numerous restaurants, cafés and retail outlets, largely located in the Campus Centre.

The Notting Hill Hotel, known among students as The Nott, is a large pub located adjacent to the campus and forms a major part of the social life for students on campus. It contains three bars, two beer gardens and two bistros. Now something of an institution, the Nott was founded in 1891 as a half way house for travellers, but boomed from the early 1960s after the establishment of Monash, expanding to cover an area of 0.8 hectares. It was owned and run by Australia's longest-serving publican, Kath Byer (known as the Reverend Mother by students) from 1936 until her death in 2010.

Monash Clayton also runs Host Scheme, the largest student-based orientation program in the Southern hemisphere. It has been in existence since 1974, and includes orientation camps, tours, BBQs, functions, festivals, and massive party called Host Scheme Night, which is run on the Monday night of O-week every year.

The Clayton Campus is also a short trip from Chadstone Shopping Centre, the largest shopping mall in the Southern Hemisphere. 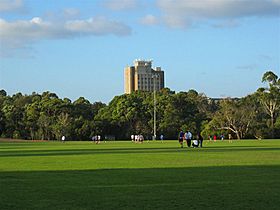 Howitt Hall at the Clayton campus in Victoria Australia, site of Briggs Hall and Jackomos Hall

The Clayton Campus is also affiliated with Mannix College (adjacent to the university).

Faculties at the Clayton campus

All content from Kiddle encyclopedia articles (including the article images and facts) can be freely used under Attribution-ShareAlike license, unless stated otherwise. Cite this article:
Monash University, Clayton campus Facts for Kids. Kiddle Encyclopedia.