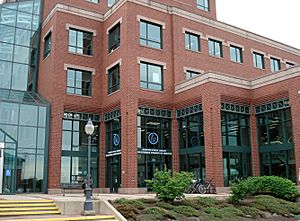 The Moncton Public Library was founded in 1913. It was made possible thanks to the efforts of the Fort Cumberland Chapter of the IODE which started working on the project as early as 1911. The library was originally opened in the old City Hall and was destroyed by fire on February 25, 1914. Afterwards, it was moved to the Higgins Block, which is located on the corner of Main Street and Botsford Street. On February 27, 1927, the library was moved to Archibald House, which burned down on March 2, 1948.

After the fire, the Moncton Public Library was moved to Kirby House, located at 51 Highfield Street, where it was officially reopened on January 20, 1949. This building was demolished in October 1961 in order to build a new one for the library on the same land; it was inaugurated on September 22, 1962. The Moncton Public Library is currently located in the Blue Cross Centre where it has been since 1989. The library's previous location on Highfield Street was renovated to accommodate office space in 1991.

On July 13, 2012, a statue of former Moncton resident Northrop Frye was unveiled in front of the library. It was created by artists Darren Byers and Fred Harrison. 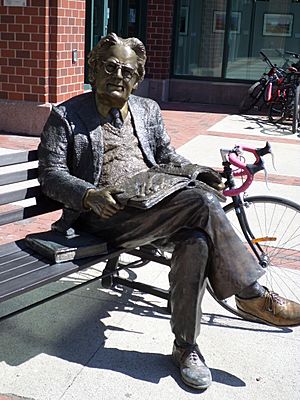 In 1998 the City of Moncton's name bank committee suggested that the Moncton Public Library change its name to the Northrop Frye Library to honour the acclaimed literary critic Northrop Frye, who lived in Moncton during his early years. However, the library board of the time disagreed on the grounds that though Frye had a great international reputation and was a renowned and celebrated philosopher and critic, he had "done nothing for the Moncton Public Library itself". The board was also concerned that, if the library were to become the Northrop Frye Library, citizens might get the impression that the public library was instead an archive dedicated to Frye and his works. In order to honour this famous Monctonian, the library instead chose to name a meeting room after him.

The Magnum Opus Gala and Art Auction was the Moncton Public Library's main fundraising event from 2007 to 2010. Taking place in October the art auction was an opportunity to raise funds for improvement of library collections, but also offered "artists across Atlantic Canada the opportunity to get exposure for their work and the chance to sell a piece of their art."

All content from Kiddle encyclopedia articles (including the article images and facts) can be freely used under Attribution-ShareAlike license, unless stated otherwise. Cite this article:
Moncton Public Library Facts for Kids. Kiddle Encyclopedia.