Monroe, known as "the Swiss Cheese Capital of the USA", is a city in and the county seat of Green County, Wisconsin, United States. The population was 10,827 at the 2010 census. The city is bordered by the Town of Monroe to the north and the Town of Clarno to the south.

There were 4,810 households of which 27.4% had children under the age of 18 living with them, 42.8% were married couples living together, 10.7% had a female householder with no husband present, 4.3% had a male householder with no wife present, and 42.2% were non-families. 36.4% of all households were made up of individuals and 16.9% had someone living alone who was 65 years of age or older. The average household size was 2.22 and the average family size was 2.87. 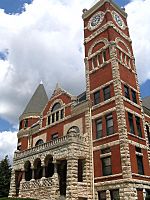 The Richardsonian Romanesque style courthouse, located on the Square, was built in 1891.

Wisconsin and Southern Railroad serves the city with freight service. A branch line from Janesville ends at Badger State Ethanol.

Monroe's parks include Twining Park, where the city's Swiss bandshell is located; Recreation Park, home to the city swimming pool; and Honey Creek Park, the site of a skate park. The city is the eastern starting point for the Cheese Country Trail, a 47-mile multi-purpose recreational path, and the Badger State Trail, a bicycle and pedestrian-only trail in summer and an ATV/snowmobile trail in winter. The "Cheese Trail" extends from Mineral Point to Monroe, while the Badger State Trail runs from the state line to Madison and connects to the Jane Addams Trail in Illinois. Both are former railway corridors. Monroe is also home to Stateline Ice and Community Expo (S.L.I.C.E.), the only indoor ice-rink in Green County.

All content from Kiddle encyclopedia articles (including the article images and facts) can be freely used under Attribution-ShareAlike license, unless stated otherwise. Cite this article:
Monroe, Wisconsin Facts for Kids. Kiddle Encyclopedia.