Monson is a town in Piscataquis County, Maine, United States. The population was 686 at the 2010 census. The town is located on Route 15 which is a somewhat major route north to the well known Moosehead Lake Region, to which Monson is sometimes considered a gateway. This route ultimately leads to the Canadian Province of Quebec.

The town is well known in local and state history, but is minimally known elsewhere, although contributions by the town, and its location are notable. It is the last town located on the Appalachian Trail at the beginning (or end) of the 100-Mile Wilderness. It is not uncommon to see many hikers in town resting before (or after) their trip into the Wilderness, and several lodging places in town cater directly to these hikers. 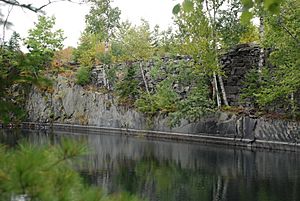 Monson was founded on February 8, 1822, by an act of the state legislature. It was named after Monson, Massachusetts. Previously the town was part of a piece of land granted to both Hebron Academy and Monson Academy by the state of Massachusetts in 1811. On April 22, 1822, the town had its first town meeting to form a government. However the first resident first came here in 1816 after being here the previous fall to clear trees out for a settlement. Monson is also referenced in the book The Maine Woods by Henry David Thoreau wherein a drawing of moose antlers depicting the direction and names of both Blanchard and Monson, and the town is mentioned in other sections of the book. The antlers have been stolen and replaced several times, but currently they exist in the approximate location on a pole after leaving the town of Abbot.

In 1870, slate was discovered by a resident who had immigrated from Wales, while driving his horse in the countryside of the town. Over the next few decades, many slate quarries were created, increasing the population of the town, as well as generating a source of income for residents. Large-scale slate operations required construction of the Monson Railroad in 1883; and two foot gauge locomotives transported slate and passengers to the larger Bangor and Aroostook Railroad in Abbot until 1943. The slating industry began to decline after World War I and most of the operations effectively ended. Currently, Sheldon Slate Company is the only operation that exists in the town, although there is a smaller operation selling typically roofing and landscaping slate. The slate from Monson makes up the Kennedy headstones in Washington, D.C.

In 1945, after a fire at Greenville's Moosehead Woodcrafters resulted in the company buying a former slate company's buildings that created Moosehead Manufacturing, which produced furniture products for over 60 years until its recent closure in 2007. The company had a sister plant located in Dover-Foxcroft, and a store in North Carolina, and shipped its products all over the state, country, and even as far away as Japan and other countries. The operation created many jobs for several generations, and it was not uncommon that fathers and sons, as well as mothers and daughters, would work together. The town was greatly impacted by the revenue and income generated by the company, and had as many as 250 workers who lived either in town or in several communities around the town.

Throughout its history, Monson has been greatly surpassed by its neighbors to the north by means of tourism. The town had a hotel, and even a steamboat that took people on trips on Lake Hebron in the late 19th century and early 20th century, but due to several causes, the hotel and many of the local businesses dealing with tourism in the early 20th century were diminished. Since the 1990s, Monson has increased again in tourism and, with the closure of Moosehead Manufacturing, many consider Monson (as well as much of Piscataquis County), to cater towards tourism. This is evidenced in the rise of antique shops, a new pub and lodging, and several similar businesses increasing on Main Street.

There were 308 households of which 20.5% had children under the age of 18 living with them, 51.6% were married couples living together, 5.2% had a female householder with no husband present, 3.2% had a male householder with no wife present, and 39.9% were non-families. 33.1% of all households were made up of individuals and 12.7% had someone living alone who was 65 years of age or older. The average household size was 2.23 and the average family size was 2.85.

All content from Kiddle encyclopedia articles (including the article images and facts) can be freely used under Attribution-ShareAlike license, unless stated otherwise. Cite this article:
Monson, Maine Facts for Kids. Kiddle Encyclopedia.