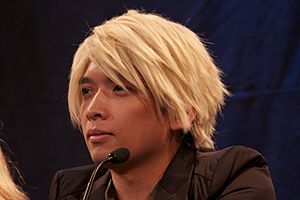 Monyreak "Monty" Oum (June 22, 1981 – February 1, 2015) was an American animator. He was known for his crossover fighting videos and worked for Rooster Teeth Productions to animate for Red vs. Blue and RWBY. He began working for Rooster Teeth in 2005.

Oum was born in Providence, Rhode Island. He was of Cambodian, Vietnamese, Chinese and Japanese ancestry. He was married to Sheena Duquette. He died from an allergic reaction as a result of the surgery on February 1, 2015.

All content from Kiddle encyclopedia articles (including the article images and facts) can be freely used under Attribution-ShareAlike license, unless stated otherwise. Cite this article:
Monty Oum Facts for Kids. Kiddle Encyclopedia.