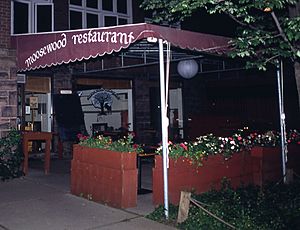 Moosewood Restaurant is a restaurant that was founded by Therese Tischler, Judy Barringer, Mollie Katzen, Kris Miller, Josh Katzen and others in 1973 in downtown Ithaca, New York. Moosewood is located on the first floor of the Dewitt Mall building, which is a converted high school. When The Seed Company (a bookstore cafe) closed, the owners gave Therese Tischler the money they had left saying, "We're giving this ($1200) to you because we know you'll find something good to do with it." Therese had been politically active as a student at Cornell and was very concerned with ecology and the health of people and the planet. The work of Frances Moore Lappé and Adelle Davis formed part of her inspiration. She wanted to open a vegetarian restaurant and went to Judy Barringer and Kris Miller with the idea. About a year later Moosewood opened its doors. It won a James Beard Foundation "American Classic" Award in 2000. While they are most known for vegetarian cuisine, their menu does occasionally feature a seafood option.

All content from Kiddle encyclopedia articles (including the article images and facts) can be freely used under Attribution-ShareAlike license, unless stated otherwise. Cite this article:
Moosewood Restaurant Facts for Kids. Kiddle Encyclopedia.