Morgan's Wonderland is a 25-acre non-profit accessible theme park in San Antonio, Texas for guests of all ages and abilities. The park, which opened in 2010 on the site of the former Longhorn Quarry, was developed by Gordon Hartman, a former homebuilder from San Antonio; his daughter Morgan, who deals with cognitive and physical challenges, inspired creation of the park.

Morgan's Wonderland is the first theme park of its kind in the world, and has welcomed more than a million guests from all 50 states and 71 other countries. Completely wheelchair-accessible, the $34 million park features more than 25 elements and attractions including rides, playgrounds, gardens, an eight-acre catch-and-release fishing lake, 18,000-square-foot special-event center, 575-seat amphitheater, picnic area and rest areas throughout the park.

The organization's mission statement is: “To provide a safe, clean and beautiful environment free of physical and economic barriers that all individuals – regardless of age, special need or disability – can come to and enjoy,” and is often accompanied by the motto, “Where Everyone Can Play!”

Admission for guests with special needs is free; and admission fees for accompanying family members, friends, caregivers and the general public are nominal.

In 2005, Hartman sold his successful homebuilding business to establish The Gordon Hartman Family Foundation so he and his wife, Maggie, could pursue their dream of helping children and adults with special needs. During a family vacation, Morgan wanted to play with kids tossing a ball in a hotel swimming pool, but when she approached them, they abruptly took their ball and vanished. “I’ll never forget the look of anguish and dismay on Morgan’s face, so I decided there had to be a way to bridge the gap of misunderstanding about people with special needs. That incident was the tipping point for Morgan’s Wonderland and ultimately Morgan’s Inspiration Island,” Hartman said.

Because of the emphases on inclusion, the two parks have earned national and international acclaim. In 2017, the World Waterpark Association bestowed its Leading Edge Award on Morgan's Inspiration Island for its accessible design and waterproof wheelchairs. Morgan's Wonderland was proclaimed "Park of the Year" at the 2017 Golden Ticket Awards presented by the amusement-park magazine Amusement Today. Both parks received the 2018 Barrier-Free America Award from the Paralyzed Veterans of America organization headquartered in Washington, D.C. In August 2018, Morgan's Inspiration Island was named one of "The World's Greatest Places" by Time magazine. 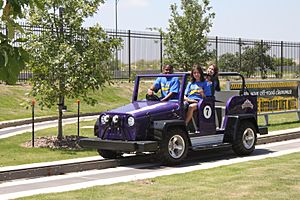 The Off Road Adventure Ride

Rides are custom-designed to accommodate wheelchair riders. Adapted rides include the Wonderland Express train, with 0.5 miles (0.80 km)of track that wraps around the park's scenic lake; the Off-Road Adventure, where guests can drive all-terrain-type vehicles; the Whirling Wonder Ferris wheel, with a dozen brightly colored gondolas that rise up to 5+1⁄2 stories high for panoramic views of the park; and a carousel with horses and other animals. The latter sits flush with the ground, with “chariots” that move up and down as the carousel turns, giving those in wheelchairs the same sensation as guests riding horses.

The Wharf, which juts out into the lake, allows visitors to pilot remote-controlled pirate ships or do catch-and-release fishing for catfish or bass. The Sensory Village is a cluster of storefronts with activities to encourage imaginative play and stimulate all the senses.

There are also two expansive, shaded playgrounds and a variety of swings (including wheelchair swings).

The covered Picnic Place allows visitors the option of purchasing snacks and drinks at Morgan's Wonderland or bringing food with them to the park. 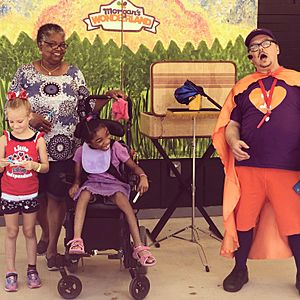 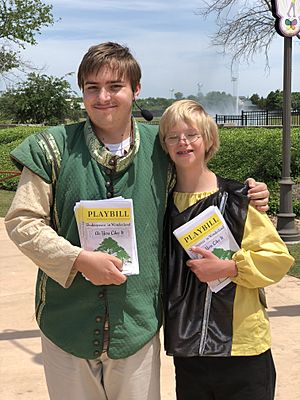 Morgan's Wonderland is designed for all visitors, and its live entertainment demonstrates and celebrates inclusion. On some operating days, there are meet-and-greets with park mascots and characters, live-action stage performances, interactive performances, and street performers.

In late 2015, Morgan's Wonderland added The Wonder Squad to their in-park entertainment lineup. Composed of four super-heroes – accompanied by “super-eye dog,” Uno – The Wonder Squad is known for “turning disabilities into SUPER abilities.”

Early in the design of Morgan's Wonderland, the public was asked to identify the most important thing the park should focus on. The most highly-ranked response was safety, which was taken into consideration not only in designing the custom rides and playgrounds, but also in ensuring everyone (including special-needs guests and caregivers) stays within the park boundaries.

Thus, Morgan's Wonderland uses radio-frequency identification technology within each of its GPS Adventure Bands and two Location Stations. Each arriving guest is offered the option to wear a GPS Adventure Band; each band has a unique identification number that is electronically assigned to the guest and his or her group. Scanning the band at either Location Stations displays the exact location of each group member.

The band also enables guests to take part in electronic activities. For example, scanning the band at the Auto Shop in the Sensory Village will enable a guest to use a finger to “paint” an onscreen vehicle and forward the finished graphic to an email address. Similarly, scanning the band at the Off-Road Adventure will result in the taking and sending of a photo of riders in a vehicle to the guest's email. 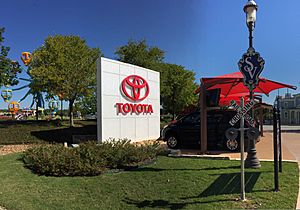 On August 28, 2012, Toyota was named presenting sponsor of Morgan's Wonderland. Various vehicles adapted by Toyota to help physically challenged individuals can be seen on display in the park.

Each spring and fall, Morgan's Wonderland hosts more than 8,000 elementary school children from over 130 schools for structured educational field trips that are tailored specifically to state-mandated Texas Essential Knowledge and Skills (TEKS) requirements.

The park also works closely with Cub Scouts in helping them complete requirements and electives, and it serves as a Girl Scouts Community Partner. All scouts who visit the park with their groups receive complimentary Morgan's Wonderland patches.

In 2017, Morgan's Wonderland began The Wonderland Inclusion Tour, a road show that allows the park to spread its mission of inclusion and understanding into the community. Shows include dance parties, interactive puppetry, and anti-bullying presentations.

Morgan's Wonderland is the anchor of a destination called Wonderland, Texas, which exists primarily for fun as well as helping the special-needs community. Attractions include the South Texas Area Regional Soccer Complex, the San Antonio Scorpions FC pro soccer team, Toyota Field multi-purpose stadium and Monarch Academy at Morgan’s Wonderland, a school for students with special needs. Other elements include The Academy at Morgan's Wonderland, a school for students with special needs; the Children's Rehabilitation Institute of Teletón USA (CRIT USA), a therapeutic center for youngsters with physical challenges; and Morgan's Inspiration Island. Wonderland, Texas is also the home of STRAPS (South Texas Regional Adaptive and Para Sports), which provides sports competition for athletes with disabilities and special needs.

The Academy at Morgan’s Wonderland

In Spring 2011, a group of families and friends met with the Hartmans to share dreams for their children with special needs. The group's goal was to create a school in which every student from age 12 to 24 could reach his or her maximum potential. The Academy at Morgan's Wonderland, which opened in August 2011, is the realization of that goal. In addition to academic instruction, The Academy through its Bridge Program focuses on equipping students with life skills that will help them become productive adults. Students directly benefit from their close proximity to Morgan's Wonderland; they get to take part in physical education sessions at the theme park. The Academy closed its doors in 2019.

The Children's Rehabilitation Institute of TeletónUSA, or CRIT USA, is a non-profit rehabilitation center for children who are born with or who have suffered neurological, muscular or skeletal disorders and injuries. Located next to Morgan's Wonderland, CRIT USA is the first of its kind in the United States. It opened in November 2014 and serves hundreds of outpatients from coast to coast.

Morgan's Wonderland has partnered with CRIT USA to offer additional rehabilitation opportunities for patients and a recreational outlet for families whose children are undergoing treatment. Typical physical therapy sessions make use of outdoor playground equipment and other attractions at Morgan's Wonderland.

South Texas Regional Adaptive and Para Sports (STRAPS) offers athletes of all ages with physical disabilities the opportunity for sports competition in eight programs such as wheelchair soccer; wheelchair basketball; and goalball, a sport similar to soccer for visually impaired athletes. Veterans wounded in the line of duty who are undergoing treatment at the San Antonio Military Medical Center and the Center for the Intrepid at nearby Fort Sam Houston represent some of the many STRAPS athletes who compete at Morgan's Wonderland on a regular basis. 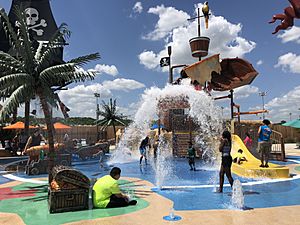 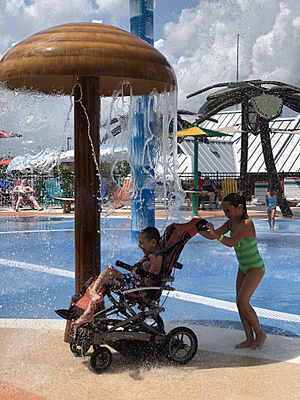 Wheelchair guests are allowed to privately transfer out of their chairs into waterproof chairs. This gives them the opportunity to enjoy the splash park and not risk damage to their personal wheelchairs. 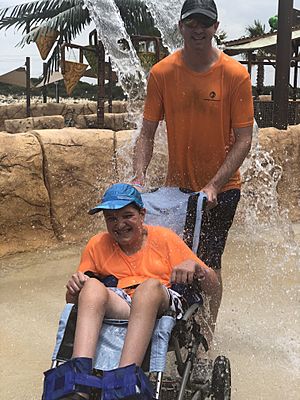 All content from Kiddle encyclopedia articles (including the article images and facts) can be freely used under Attribution-ShareAlike license, unless stated otherwise. Cite this article:
Morgan's Wonderland Facts for Kids. Kiddle Encyclopedia.