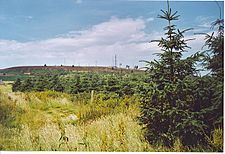 Mormond Hill and its antennae

Mormond Hill (Scottish Gaelic A' Mhormhonadh, meaning the great hill or moor) is a large hill in Aberdeenshire, Scotland, not far from Fraserburgh. Its peak is 769 feet (234 m). The villages of Strichen and New Leeds can be found at its southern foothills.

It also has a smattering of disused satellite dishes and masts on top, remnants from Cold War U.S. armed forces communications and British Telecom having a presence on the site.

The hill is mentioned in the traditional Scottish ballad known as Mormond Braes. The word 'Brae' comes from bràigh ("top") in Scottish Gaelic, while the rest of the ballad is a mix of English and Scots, with references to 'Strichen toon'. The ballad is about a girl who's lost her lover and is preparing herself to face the world and get another.

The hill is also referenced in the poem Farewell to Tarwathie by George Scroggie of Strichen, published in 1857, and now better known as the song published in Volume 1 of the Greig–Duncan collection (c. 1909).

The White Horse and the White Stag

A white horse is depicted on the side of the hill made from white quartz that has been placed into position to make the shape; its location is some 1500 m NE of Strichen. The exact date of construction is unknown, but is around the late 1790s. The most widely accepted story for its origin is that the horse was cut by a Captain Fraser, whose horse was shot from under him in a battle in the Flanders Campaign in 1794. A sergeant Henderson, who offered him his own horse, was shot dead in the process. Upon his return Captain Fraser cut the horse as a memorial to the sergeant.

The stag, made in 1870, is much larger than the nearby horse, is about 150 metres (160 yd) above sea level. It is 240 feet (73 m) long and unlike the other figures it is constructed from quartz rocks about 5 inches (13 cm) in diameter. Tree growth below the figure is increasingly blocking the view. The stag was made by the tenants of the Laird to commemorate his wedding. There is some disagreement as to whether its original form was an outline figure or solid figure. At some stage it has been in outline only, but is now solid. The stag was cleaned in 1939, 1946, 1955, 1984 and in 1994/95.

Unusually, these are the only two hill figures located in Scotland. There are three more in Wales and roughly 50 more in England. The White Horse is one of sixteen horses in the United Kingdom. The stag is one of two stags in the United Kingdom, although the other, in the Rheidol Valley, near Aberystwyth, is a mining feature which merely resembles a stag and not a true hill figure.

All content from Kiddle encyclopedia articles (including the article images and facts) can be freely used under Attribution-ShareAlike license, unless stated otherwise. Cite this article:
Mormond Hill Facts for Kids. Kiddle Encyclopedia.