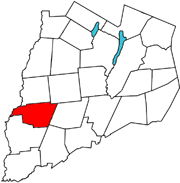 Morris is a town located in Otsego County, New York, USA. As of the 2010 census, the town had a population of 1,878. The town is named after General Jacob Morris.

Morris was formed from the Town of Butternuts April, 1849. The town was named after General Jacob Morris, the son of Lewis Morris a signer of the Declaration of Independence, who was granted land due to property lost during the revolution. In 1859, a part of Town of Pittsfield was transferred to Morris.

Some historical data shows population for 1850 of 2155, in 1855 there were 2038, in 1860 pop 2320, in 1865 a total of 2191, in 1870 pop 2253, and in 1875 there were 2303. After this local population declined the textile mills closed, numbers of sheep plummeted, hops began to give way to dairying, and the local bank failed after speculating in silver mines in New Mexico. There were several projected railroad lines through the vicinity since the mid-19th century. The most promising was a Sidney to Utica trolley line sponsored by Silas Kelsey of Burlington. At the same time Dr. Lewis Morris, who owned the Unadilla Valley Railroad, was sponsoring his own railroad extension from New Berlin through Morris to Oneonta where he intended to have an interchange yard with Delaware & Hudson and Ulster & Delaware railroad lines, land which he donated to Oneonta in 1914, as Neahwa Park. Surveys for both routes were completed and staked but not all of the right of ways given, and the trolley line was built over in the Otego Valley instead.

The Morris-Lull Farm, All Saints Chapel and Morris Family Burial Ground, and Zion Episcopal Church Complex and Harmony Cemetery are listed on the National Register of Historic Places.

There were 737 households out of which 33.9% had children under the age of 18 living with them, 55.1% were married couples living together, 12.1% had a female householder with no husband present, and 28.1% were non-families. 23.3% of all households were made up of individuals and 9.2% had someone living alone who was 65 years of age or older. The average household size was 2.53 and the average family size was 2.92.

All content from Kiddle encyclopedia articles (including the article images and facts) can be freely used under Attribution-ShareAlike license, unless stated otherwise. Cite this article:
Morris (town), New York Facts for Kids. Kiddle Encyclopedia.