Morven is a small village about 7 kilometres east of Culcairn in the eastern Riverina district of New South Wales, Australia. At the 2006 census, Morven had a population of 464 people. 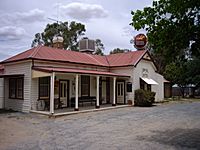 The town was serviced by the Holbrook branch railway line until the line was closed over 20 years ago. 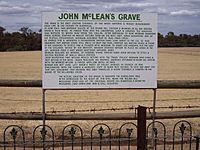 The bushranger Dan "Mad Dog" Morgan roamed the area in the mid-19th century and held up the Round Hill Station property situated along the road to Culcairn. During the hold-up he fatally wounded John McLean, an employee of the station, and a grave and memorial stands at the site to commemorate the event.

In recent years Morven has continued to remain viable with a number of new houses being build and residents moving in. The site of the village still boasts the old church, a set of tennis courts and the Round Hill Hotel.

All content from Kiddle encyclopedia articles (including the article images and facts) can be freely used under Attribution-ShareAlike license, unless stated otherwise. Cite this article:
Morven, New South Wales Facts for Kids. Kiddle Encyclopedia.