Holbrook is a small town in Southern New South Wales, Australia. It is on the Hume Highway, 384 kilometres (239 mi) by road North-East of Melbourne and 492 kilometres (306 mi) by road south-west of Sydney between Tarcutta and Albury. The town is in the Greater Hume Shire which was established in May 2004 from the merger of Culcairn Shire with the majority of Holbrook Shire and part of the Hume Shire. At the 2016 census, Holbrook had a population of 1,715 people. The district around Holbrook is renowned for local produce including merino wool, wheat and other grains, lucerne, fat cattle and lamb.

The area was originally inhabited by the Wiradjuri people.

The explorers Hume and Hovell were the first-known Europeans in the area. They travelled through in 1824 looking for new grazing country in the south of the colony of New South Wales.

The town was originally called Ten Mile Creek and the first buildings were erected in 1836. A German immigrant, John Christopher Pabst, became the publican of the Woolpack Hotel on 29 July 1840 and the area became known as "the Germans". By 1858 the name had evolved into the official name of Germanton, though the postal area retained the name Ten Mile Creek. In 1876 the name Germanton was gazetted and the old name Ten Mile Creek consigned to history.

Ten Mile Creek Post Office opened on 1 January 1857, and was renamed Germanton in 1875. During World War I, the town name was deemed unpatriotic so on 24 August 1915 the town was renamed Holbrook in honour of Lt. Norman Douglas Holbrook, a decorated wartime submarine captain and winner of the Victoria Cross. Lt. Holbrook commanded the submarine HMS B11.

The town was a stop on Old Sydney Road – the road between Sydney and Melbourne. The railway arrived in Germanton in 1902. The town was serviced by the Holbrook branch railway line until the line was closed in 1975.

In 2013, a re-alignment of the Hume Highway around Holbrook was completed so it is now possible to by-pass the town. 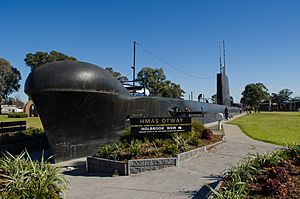 The casing and fin of HMAS Otway, at Holbrook

To honour Lieutenant Holbrook, the town's namesake, the Holbrook council acquired a portion of the hull of HMAS Otway, an Oberon-class submarine, after it was decommissioned by the Royal Australian Navy in 1995. The Navy gifted the fin from the submarine to the town. This resulted in a fund-raiser by the town and district to purchase the whole submarine. This drive was successful in raising $100,000, almost all a gift from Lt Holbrook's widow, Gundula Holbrook. However, this amount was insufficient to purchase all of the Otway. Through negotiations with the scrap yard in Sydney, the town succeeded in purchasing all of the outside casing of Otway above the waterline. This part of the Otway is now displayed in Germanton Park in the heart of Holbrook, having been dedicated on 7–8 June 1997.

The National Museum of Australian Pottery is housed in the old A. H. Mackie and Company building. It features over 1500 pieces made from the earliest colonial potteries up to the end of World War 1.

A scale model of the B11 in Holbrook

Less than 1% of the population identified themselves as being of indigenous origin (compared with 2.2% for the whole of Australia).

English was the only language spoken at home by 95.3% of those in the Holbrook local statistical area compared with 80% of Australians. 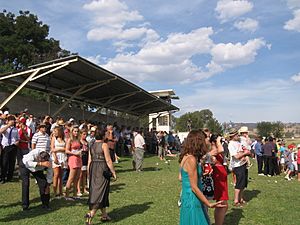 The median weekly individual income for people aged 15 years and over in the 2001 Census was $300–$399. This was the same as for Australia.

All content from Kiddle encyclopedia articles (including the article images and facts) can be freely used under Attribution-ShareAlike license, unless stated otherwise. Cite this article:
Holbrook, New South Wales Facts for Kids. Kiddle Encyclopedia.