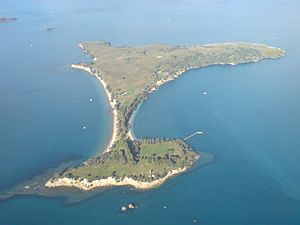 The island from the air, looking east.

Motuihe Island lies between Motutapu and Waiheke islands in the Hauraki Gulf of New Zealand, near Auckland. The island measures 179 ha (440 acres), of which around 18 ha (44 acres) are remnants of coastal forest. The island is a recreation reserve controlled by the Department of Conservation (DOC) and administered by the Motuihe Trust. It is a popular spot for day trips, accessible by 30-minute ferry trip from Auckland, by seaplane, or by private boat. The island is known for its beautiful beaches.

The name comes from Te Motu-a-Ihenga, Māori for 'Ihenga's Island'.

Very soon after arrival of the Europeans in the area, farming began in the 1840s. Groves of Norfolk pines and olive trees are remnants of this time.

During the First World War, the station was used as an internment camp whose most famous prisoner was Count Felix von Luckner and his crew of the commerce raider SMS Seeadler. Captured in September 1917, in December Luckner used a Christmas play as a ruse to organise an escape. He got provisions and seized the island's launch, a scow. Then sailing to the Kermadec Islands he was recaptured (and escaped again), though not before becoming something of an odd type of hero in the eyes of many New Zealanders, for the fact that his numerous and daring wartime escapades had killed only a single person.

Following the First World War, the island was again used as a quarantine station during the 1918 flu pandemic.

With the outbreak of World War II, the buildings became a naval training base, HMNZS Tamaki, and a number of newer buildings were added. The base remained a navy training ground until 1963, when its functions were moved to the North Shore mainland.

The wharf on the southern side of the island, with the bay behind filled with day-tripper boats.

The island's trust organises an active programme of pest eradication and is slowly replanting sections of the island with native trees. Rats and mice were eradicated in 1996 and rabbits in 2004. The conservation programme has reintroduced native species like the North Island saddleback (tieke). The Trust maintains a small conservation presence on the island, and usually has a number of volunteers working at the local tree nursery or in other conservation programmes.

In early 2008, rat footprints were found in a tracking tunnel (a device to check for the presence of certain animals) on the island. This set off a substantial effort by the trust and DOC to catch the rodent, which was feared to be part of a larger infestation. The Norwegian rat was eventually trapped by a special hunting dog, allowing plans to release native red-fronted parakeets (kākāriki) to continue as planned in May 2008, when 31 were brought by helicopter from Little Barrier Island, where there is a relatively large population.

In March 2009, fifteen little spotted kiwi were released on the island.

Many invasive weed species are present on Motuihe. Moth plant, woolly nightshade and rhamnus slow the forest's regeneration. They require constant management from the help of volunteers.

All content from Kiddle encyclopedia articles (including the article images and facts) can be freely used under Attribution-ShareAlike license, unless stated otherwise. Cite this article:
Motuihe Island Facts for Kids. Kiddle Encyclopedia.