Mount Carlisle is a stratovolcano in Alaska which forms part of the 5 mile (8 km) wide Carlisle Island, one of the Islands of Four Mountains which, in turn, form part of the central Aleutian Islands.

Despite its modest summit elevation, a small glacier exists high on the western slopes just below the rim of the summit crater.

A few historical eruptions of Carlisle have been recorded, but its proximity to several other neighboring volcanoes means that there has been some confusion in the older records as to which of the volcanoes was erupting. As the area is extremely remote, distant observations of volcanic plumes cannot be verified for certain. 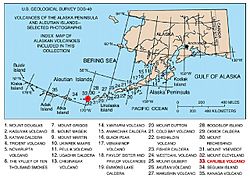 Map showing volcanoes of Alaska. The mark is set at the location of Mount Carlisle.

All content from Kiddle encyclopedia articles (including the article images and facts) can be freely used under Attribution-ShareAlike license, unless stated otherwise. Cite this article:
Mount Carlisle Facts for Kids. Kiddle Encyclopedia.