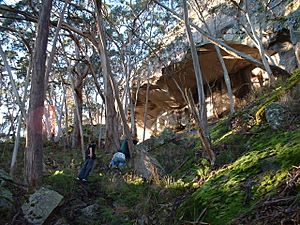 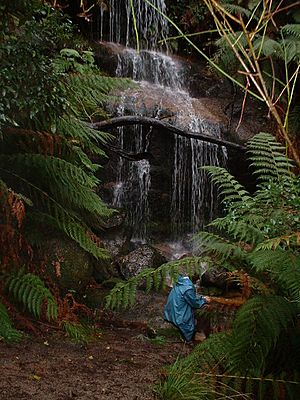 The Mount Cole State Forest is in western Victoria, Australia, near the town of Beaufort. The forest is around Mount Cole, which formed 390 million years ago. The Indigenous Australians, the Beeripmo balug people, called it Bereep-bereep, which means wild. The forest covers an area of 12,150 hectares, including the forest around Mount Lonarch.

The forest is on a plateau which is above grassy plains. The plateau is about 760 metres above sea level. High peaks in the forest include Mount Buangor (1,090 metres), Mount Cole (899 metres) and Ben Nevis (877 metres).

There have been 130 different birds seen in the forest. Animals include kangaroos, wallabies, echidna, koalas and possums. In 1954, 160 koalas were set free in the forest to as part of a plan to re-establish the animals in Victorian forests. In the 19th century, deer were introduced and Sambar deer are still living in the wet gullies in the south of the forest.

The purpose of the forest is to supply good quality hardwood logs for sawmills. The management plan for the forest also protects the water catchments of several creeks which supply water to nearby towns.

An area of 1,940 hectares, the Mount Buangor State Park, was protected from logging in 1973. This park includes the waterfalls on Middle Creek, and the large rock faces and caves on Cave Hill.

All content from Kiddle encyclopedia articles (including the article images and facts) can be freely used under Attribution-ShareAlike license, unless stated otherwise. Cite this article:
Mount Cole State Forest Facts for Kids. Kiddle Encyclopedia.