Mount Sentinel, originally known as "Mount Woody," is a small mountain located immediately east of the University of Montana in Missoula, Montana. At a height of 1,958 feet and an elevation of 5,158 feet (1,572 m), Mount Sentinel also features the hillside letter "M", a large concrete structure 620 feet (189 m) up its western face.

The University of Montana first received land on Mount Sentinel in 1902 when the Northern Pacific Railroad Company donated 40 acres at the foot and up the slope of the mountain. The U.S. Congress later turned over many acres of Mount Sentinel so that campus extended up the slope to the crest of the mountain, making the University of Montana the only university in the nation to own a mountain. In 2000, the city of Missoula also purchased 475 acres along the face of Mount Sentinel. 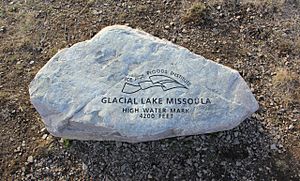 Between 15,000 and 13,000 years ago, a Pleistocene Ice Age glacier moved through the Purcell Trench in northern Idaho, damming the Clark Fork River. This glacial dam created Glacial Lake Missoula, a lake larger than Lake Erie and Lake Ontario combined. As the lake continued to grow, pressure increased on the glacial dam, ultimately causing the dam to fail. Water from the lake rushed westward at speeds between 30 and 50 miles per hour across Montana, Idaho, and Washington. The violent flow created by the draining of Glacial Lake Missoula left shoreline marks that are still visible on the face of Mount Sentinel and Mount Jumbo, a neighboring mountain to the north.

The first trail up Mount Sentinel to the area that the "M" would later occupy was cut by forestry students in 1908. In 1909, the junior class constructed the first "M" at the top of that trail with whitewashed rocks. In 1912, the freshman class constructed a small white "M" of wood. This "M" stood upright on the face of the mountain and cost $18 to build. The wooden "M" was destroyed by wind in 1914, replaced, and then wrecked by wind again. In 1915, a new "M" made of whitewashed rocks was constructed 200 feet above the original "M" site. A concrete "M" measuring 125-by-100-feet was built in 1968 at a cost of $4,328. The concrete structure was built because it was no longer feasible to maintain the old, rock "M". This concrete "M" is still located on Mt. Sentinel today.

Between 1915 and 1968, while the "M" was composed of whitewashed rocks, freshman boys hiked the trail to the "M" each year to apply a fresh coat of white-wash. The tradition ended with the construction of the cement "M".

Starting in 1919, freshman boys hiked the trail to the "M" during homecoming and lit the outline with railroad lanterns. This tradition continues today, with UM Advocates making the hike each year at homecoming to light the "M".

Each year, during Native American Awareness Week, a sunrise ceremony is held at the base of the "M" where traditional Salish Morning and Honor Songs are sung.

The University of Montana natural areas weed manager organizes an annual herbicide application on Mount Sentinel. There is also an annual community weed pull on the mountain. The Forest Service handles weed control for the 441 acres of Mount Sentinel that it owns.

In 2006, outdoor retail co-op REI, which gave away $1 million in grants to nonprofit groups dedicated to preservation of community parks, awarded a $10,000 grant to Friends of Missoula Parks for use on improvements to Mount Sentinel.

After a fire in 2008, the conservation lands manager for the city of Missoula and a University of Montana natural areas specialist teamed up to spread native grass and flower seeds over the area of Mount Sentinel that was burned.

In the fall of 2010, the University of Montana Student Guild of the Society for Ecological Restoration teamed up with Run Wild Missoula and other volunteers to help restore the "M" trail. The group added gravel to the path, reseeded barren areas, blocked unwanted side trails, and added more steps to the eighth switchback.

Mount Sentinel has a long history of fires, dating back to at least 1930 when the Montana Kaimin reported a grass blaze.

More recently, over 300 acres on Mount Sentinel's west slope, directly above the University of Montana campus, burned in July 2008.

On August 20th, 2020, a 25 acre grass fire was started on the West face by two children playing with a lighter 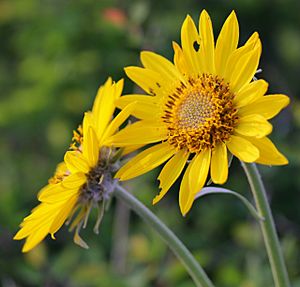 All content from Kiddle encyclopedia articles (including the article images and facts) can be freely used under Attribution-ShareAlike license, unless stated otherwise. Cite this article:
Mount Sentinel Facts for Kids. Kiddle Encyclopedia.