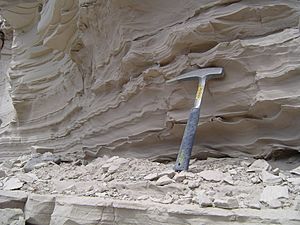 Sediment deposited by the lake with a hammer for scale.

Lake Missoula was a prehistoric proglacial lake in western Montana that existed periodically at the end of the last ice age between 15,000 and 13,000 years ago. The lake measured about 7,770 square kilometres (3,000 sq mi) and contained about 2,100 cubic kilometres (500 cu mi) of water, half the volume of Lake Michigan.

The Glacial Lake Missoula National Natural Landmark is located about 110 kilometres (68 mi) northwest of Missoula, Montana, at the north end of the Camas Prairie Valley, just east of Montana Highway 382 and Macfarlane Ranch. It was designated as a National Natural Landmark in 1966 because it contains the great ripples (often measuring 25 to 50 feet (7.6 to 15.2 m) high and 300 feet (91 m) long) that served as a strong supporting element for J Harlen Bretz's contention that Washington State's Channeled Scablands were formed by repeated cataclysmic floods over only about 2,000 years, rather than through the millions of years of erosion that had been previously assumed.

The lake was the result of an ice dam on the Clark Fork caused by the southern encroachment of a finger of the Cordilleran Ice Sheet into the Idaho Panhandle (at the present day location of Clark Fork, Idaho, at the east end of Lake Pend Oreille). The height of the ice dam typically approached 610 metres (2,000 ft), flooding the valleys of western Montana approximately 320 kilometres (200 mi) eastward. It was the largest ice-dammed lake known to have occurred.

The periodic rupturing of the ice dam resulted in the Missoula Floods – cataclysmic floods that swept across eastern Washington and down the Columbia River Gorge approximately 40 times during a 2,000 year period. The cumulative effect of the floods was to excavate 210 cubic kilometres (50 cu mi) of loess, sediment and basalt from the channeled scablands of eastern Washington and to transport it downstream. These floods are noteworthy for producing canyons and other large geologic features through cataclysms rather than through more typical gradual processes.

In addition, Middle and Early Pleistocene Missoula flood deposits have been documented to comprise parts of the glaciofluvial deposits, informally known as the Hanford formation that are found in parts of the Othello Channels, Columbia River Gorge, Channeled Scabland, Quincy Basin, Pasco Basin, and the Walla Walla Valley. The age of these deposits is demonstrated by the presence of multiple interglacial calcretes interbedded in these glaciofluvial deposits, sequences of sediments with normal and reverse magnetostratigraphy, optically stimulated luminescence dating, and unconformity truncated clastic dikes. Based upon these criteria, Quaternary geologists estimated that the oldest of the Pleistocene Missoula floods happened before 1.5 million years ago. The older Pleistocene glaciofluvial deposits within the Hanford formation are fragmentary in nature because they have been repeatedly eroded and largely removed by subsequent Missoula floods. Because of the fragmentary nature of older glaciofluvial deposits, the exact number of older Missoula floods, which are known as Ancient Cataclysmic Floods, that occurred during the Pleistocene cannot be estimated with any confidence. Although Lake Missoula likely was the source of many of the Ancient Cataclysmic Floods, the fragmentary nature of the older deposits within the Hanford formation makes precise determination of the precise origin of the floods that deposited them very difficult.

The Cordilleran ice sheet originating in British Columbia expanded out of the mountains and southward. A tongue of ice pushed down the Purcell Valley or Purcell Trench, reaching south beyond Lake Pend Oreille. This Purcell Lobe blocked the natural outlet of the Clark Fork River. Including its tributaries, Clark Fork represented western Montana's most important river system. The ice mass that effectively dammed Clark Fork was about 2,000 feet (610 m) deep and extended for at least 10 miles some people say as much as 30 miles. The ice dam reached east up the Clark's Fork to Cabinet, Montana, about 10 metres (0.010 km) and southward around the mountain to Bayview, Idaho on the south tip of Lake Pend Oreille in Farragut State Park. Here, the ice sheet stood over 2,000 feet (610 m) and 25 miles (40 km) south of Lake Missoula.

The Clark Fork's drainage is a network of valleys among high mountain ranges. Lake Missoula formed through this region of western Montana. It is named for the Missoula in the upper reaches of the Clark Fork watershed. The mountains surrounding the city show the strandlines from the lake nearly 20,000 years ago. At its largest extent, Lake Missoula's depth exceeded 2,000 feet (610 m) and may have held 600 cu mi (2,500 km3) of water as much as Lake Erie and Lake Ontario combined. The surface area covered 3,000 sq mi (7,770 km2) and the shoreline attained an elevation of 4,200 feet (1,300 m).

The lake spread through the Clark Fork River basin, reaching east of Missoula, 259 miles (417 km) to Gold Creek; northeast up the Blackfoot River 270 miles (430 km) to Lake Alva; 253 miles (407 km) and east of Ovando 270 miles (430 km). Two large lobes formed to the south and north. To the south the Bitterroot Valley filled as far as Sula, Montana, 286 miles (460 km). To the north the Flathead River basin became an expansive body of water, creating an island of Red Sleep Mountain, now the National Bison Range and extending north 286 miles (460 km) to Polson at the basin of the Flathead Ice Lobe and 286 miles (460 km) up the Little Bitterroot River to Niarada some 132 miles (212 km) above the Flathead Rivers mouth at the Clarks Fork.

The water was deep (average - 800 feet (240 m)): maximum - 2,100 feet (640 m)), dark and murky with sediment. There is no evidence of fish. Scientists speculate that sediment known as rock flour created poor aquatic habitat. No evidence of large mammals, i.e.; mammoths, mastodons and bison may have roamed nearby, there is no evidence that these animals nor of human beings in the area. The Clark Fork River flows into Lake Pend Oreille at 2,062 feet (628 m).

This reach follows Montana Route 200 up the Clark Fork River canyon, 92 miles (148 km) to Paradise, then following the Clark Fork, then 49 miles (79 km) through the Paradise-St. Regis Canyon along Montana Route 135. At St. Regis, the canyon opens out and continues to the east 49 miles (79 km) with the river paralleled by Interstate 90 to along to Ninemile, where it opens out into the Missoula basin. A western branch of this basin runs up the St. Regis River another 32 miles (51 km) along with Interstate 90 to near Riverbend. Lookout Pass, 4,679 feet (1,426 m) asl along (I-90)

The Flathead basin abutted the south face of the ice sheet. For most of this period, the glacial ice reached south to Polson, covering the entirety of Flathead Lake. The basin drains from the Polson Moraine at the south end of Flathead Lake, south to Ravalii with a major lobe up the Little Bitterroot River and a minor basin on Camas Creek near Perma.

The basin extends from Missoula, west to Ninemile and up the Ninemile Creek valley. This 39 miles (63 km) long valley broadens from 5 miles (8.0 km) at Ninemile and to 10 miles (16 km) at Missoula. The central part of this basin around Missoula is 8 miles (13 km) wide E-W and 10 miles (16 km) N-S. The basin is bordered by Rattlesnake Ridge on the north and Petty Mountain on the south(west). Features: Strandlines along the valleys east flank.

The basin southern tip in south of Conner to Lolo, 57 miles (92 km) to the north. The Bitterroot Mountains form the west shore and the Sapphire Mountains the east.

The Clark Fork of the Columbia River, has its headwater near Butte, 130 miles (210 km) east of Missoula. Lake Missoula reached up the valley, about 55 miles (89 km) to east along I-90 to just east of Gold Creek. Smaller reaches formed along the tributary valleys of Gold Creek, 13.5 miles (21.7 km) up Flint Creek forming an 8 miles (13 km) wide basin, Lower Willow Creek, and 20 miles (32 km) up Rock Creek.

All content from Kiddle encyclopedia articles (including the article images and facts) can be freely used under Attribution-ShareAlike license, unless stated otherwise. Cite this article:
Lake Missoula Facts for Kids. Kiddle Encyclopedia.