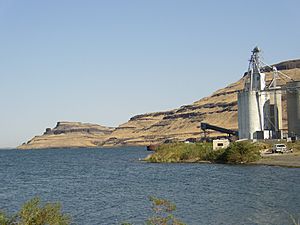 Wallula Gap (/wəˈluːlʌ ɡæp/) is a large water gap of the Columbia River through the Horse Heaven Hills basalt anticlines in the Columbia River Basin in the U.S. state of Washington, just south of the confluence of the Walla Walla and Columbia rivers. It has been recognized as a National Natural Landmark by the National Park Service as a site that provides an important illustration of the geological history of the United States.

In southeastern Washington, eastern Oregon, and southern Idaho, flood basalt flows of extremely fluid basaltic lava spread in all directions from long fissures, building broad fields of gently sloping lava that spread widely over great distances. Along the Snake River in Idaho, and the Columbia River in Washington and Oregon, these lava flows have been extensively exposed by erosion (with extensive displays of columnar basalt), and measure almost 2 km (1.24 mi) in total thickness.

The basalts flows which are visible in the Wallula Gap were laid down during the Miocene Epoch, about 17 million years ago. They are part of the massive fissure flood basalts of the Columbia River Basalt Group. During the basalt eruptions, the southern and western Columbia Plateau, which included the current location of the Wallula Gap, began to fold. The bending (or shear) of the ancient lava flows is clearly visible in the folded layers of basalt exposed in the steep walls of the gap.

Creation of the Wallula Gap

The Wallula Gap was widened about the 14th millennium BC, by the historic flow of the Salmon, Snake, and Columbia rivers combined with the glacial waters that poured across the Channeled Scablands during the Missoula floods. The Wallula Gap constrained the flow such that less than 1/5 of the 800 km³ (192 mi³) of water per day entering could be discharged as it passed into Lake Condon downstream. As a result, the floods filled the Pasco Basin and formed, for a short period, Lake Lewis. The large volumes of flood water passing through the gap contributed substantially to the erosion of the gap, as is evidenced by the shear walls and by scab-features such as "Twin Sisters".

During the Missoula floods, water backed up in the Pasco Basin because of the narrow opening of the Wallula Gap. The floods were so large in volume that they could not rapidly discharge through the gap, even though it is 2 km (1.2 mi) wide. Maximum flood waters reached elevations of about 380 meters. The hydraulic head required to drive the flood waters through the gap, combined with the elevated levels downstream of the constriction resulted in a head of about 250 meters. The peak flow is estimated to have been about 10 million cubic meters per second.

The Lewis and Clark Expedition (a.k.a. Corps of Discovery) first saw the Wallula Gap on October 18, 1805, as they headed downstream from their camp at the confluence of the Columbia and Snake rivers. The Corps camped near Spring Gulch Creek that night, and proceeded through Wallula Gap the next day.

In the 1840s pioneers headed west on the Oregon Trail found Wallula a logical stopping place to convert their wagons to boats and then continue the trip via the Columbia River. 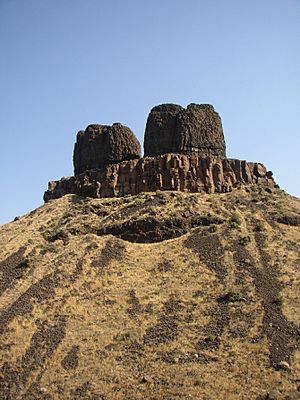 Twin Sisters: a scabland residual of the Missoula Floods on the east bank of the Columbia River in the Wallula Gap

Twin Sisters is a basalt pillar that inspired the mythology of the Wallula Gap near the Columbia River just upstream of Port Kelley, Washington. According to the Cayuse Indian tribe, who lived on the Columbia Plateau, the following legend recounts the origin of the rocks:

Coyote, the Trickster spirit hero of many native stories, fell in love with three sisters who were building a salmon trap on the river near here. Each night Coyote would destroy their trap, and each day the girls would rebuild it. One morning Coyote saw the girls crying and found out that they were starving because they had not been able to catch any fish in their trap. Coyote promised them a working fish trap if they would become his wives. They agreed, and Coyote kept his promise; however, over the years he became jealous of them. He changed two of the wives into these basalt pillars and turned the third into a cave downstream. He became a rock nearby so he could watch over them forever.

This site is a popular hiking destination for avid hikers who want to view the geology of the Wallula Gap and the effects of the ancient Missoula Floods.

All content from Kiddle encyclopedia articles (including the article images and facts) can be freely used under Attribution-ShareAlike license, unless stated otherwise. Cite this article:
Wallula Gap Facts for Kids. Kiddle Encyclopedia.