Wallula is a census-designated place (CDP) in Walla Walla County, Washington, United States. The population was 179 at the 2010 census.

The Lewis and Clark Expedition reached this area April 27, 1806, on their return journey from the Pacific. The expedition spent three days at the village of Chief Yallept and his tribe of Walla Walla people (relatives of the Nez Perce), in the company of about a hundred Yakama people. Meriwether Lewis estimated the total of Native American people at around 550. There the expedition learned of an overland route to the Nez Perce homelands, which shortened their route by some eighty miles.

During David Thompson's 1811 voyage down the Columbia River, he camped at the Snake River confluence on July 9, 1811. There he erected a pole and notice claiming the country for Great Britain and stating the intention of the North West Company to build a trading post at the site.

European settlement of the area began in 1818, when the North West Company built Fort Nez Perce at the mouth of the Walla Walla River. The location was chosen to compete with the Hudson's Bay Company for the fur trade in the Pacific Northwest. That site was maintained until 1855.

The first railroad to connect Walla Walla with the Columbia River at Wallula was begun in 1871. The 30-mile (48 km) line, called the Walla Walla and Columbia River Railroad, was completed October 23, 1875. The line was later absorbed into the Northern Pacific Railroad. To save money, the original rails were wooden, with strap iron on the upper surface.

In 1883, the Northern Pacific completed its line from St. Paul, Minnesota, to present-day Wallula. It built a railroad bridge across the river to connect to the Oregon Railway and Navigation Company tracks along the south side of the Columbia River. 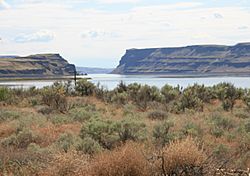 According to the United States Census Bureau, the CDP has a total area of 0.1 square mile (0.3 km²), all land.

There were 60 households, out of which 45.0% had children under the age of 18 living with them, 61.7% were married couples living together, 11.7% had a female householder with no husband present, and 20.0% were non-families. 8.3% of all households were made up of individuals, and 1.7% had someone living alone who was 65 years of age or older. The average household size was 3.28 and the average family size was 3.38.

The only businesses in the area are a US Post Office and an auto wreck yard.

All content from Kiddle encyclopedia articles (including the article images and facts) can be freely used under Attribution-ShareAlike license, unless stated otherwise. Cite this article:
Wallula, Washington Facts for Kids. Kiddle Encyclopedia.