Mount Tate is a mountain in the Mt. Tate range of the northern Hida Mountains (the north Alps). It is in the southeastern area of Toyama Prefecture. It is a general term for three peaks, Mt.O (altitude 3,003 m), Mt. Onanji (altitude 3,015 m), and Fujinooritate (altitude 2,999 m).

It is one of the mountains of Chūbu-Sangaku National Park with the dominant peak of the Tateyama mountain range. The Park was made on December 4, 1934.

It ranks with Mt. Tsurugi. They are some of the few mountains which have an existing glacier in Japan.

The mountain is composed primarily of granite and gneiss. However, located along the ridge and plateau about 2 km (1.2 mi) west of the summit is a small andesite-dacite stratovolcano. This volcano has an elevation of 2,621 m (8,599 ft), and has had minor historical eruptions, the latest in 1839.

Tateyama is located in southeastern Toyama Prefecture. At the base of the mountain is the town of Tateyama, which is accessible by train from the prefecture's capital city, Toyama. Public transportation will take climbers and tourists as far as the Murodo Plateau Station at an elevation of 2,450 m (8,038 ft), from where individuals may climb to the peak on foot. These are the only glaciers identified in Japan so far. 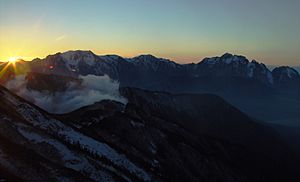 The mountain is the source of the following rivers, each of which flows to the Sea of Japan.

All content from Kiddle encyclopedia articles (including the article images and facts) can be freely used under Attribution-ShareAlike license, unless stated otherwise. Cite this article:
Mount Tate Facts for Kids. Kiddle Encyclopedia.